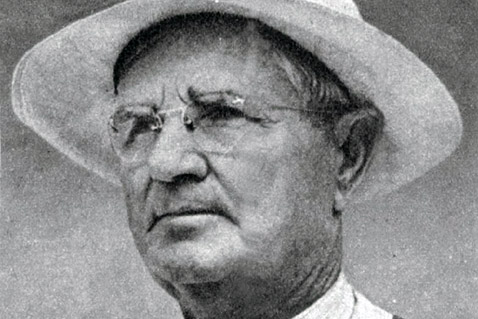 Tennessee is no stranger to political machines, the best known of which was that of Edward Hull Crump of Memphis. Yet the Shelby County organization was hardly the only functioning political operation in Tennessee. Crump’s machine was largely confined to Shelby County, but his alliance with the network presided over by Tennessee’s senior United States senator Kenneth D. McKellar stretched from Mountain City to Memphis. Yet something closer to an actual political machine dominated Polk County for decades.

Polk County is nestled in the southeastern corner of Tennessee where North Carolina sits to the east and Georgia to the south. Bradley County is to the west while McMinn and Monroe Counties are to the north of Polk County. Created by an act of the Tennessee General Assembly on November 23, 1839. The county was named for then-Governor (and later President of the United States) James K. Polk.

Burch E. Biggs’ grandfather, Colonel William Biggs, was “generally believed” to have been one of the first white settlers in what eventually became Polk County. Born on St. Patrick’s Day in 1874, Burch Biggs held sway in Polk County for quite nearly half a century. Indeed, his grip on Polk County was frequently compared to that of E. H. Crump over Memphis and Shelby County. The source of Biggs’ political power was the sheriff’s office. Burch Biggs was elected sheriff of Polk County eight times. When he was out of office, one of his two sons usually served as the sheriff. According to the Knoxville News-Sentinel, “At his peak, Biggs had built and led one of the most powerful and tightly knit-political organizations in the state.”

Sheriff Burch Biggs was one of those rare East Tennessee political bosses closely allied with the McKellar-Crump faction of the Democratic Party. More than any other single individual in Tennessee, Senator Kenneth McKellar was the fount from which all blessings flowed. McKellar was legendary in his home state for his personal attention to detail and the people he represented and frequently went to great lengths to be helpful to his constituents. Following the election of Franklin D. Roosevelt to the presidency in 1932, McKellar was recognized as one of the most powerful members of the United States Senate and more importantly, at least to people like Sheriff Burch Biggs, was the dispenser of all federal patronage in the State of Tennessee. It was McKellar, not Crump, who controlled all the federal jobs in the state. Nor did Senator McKellar seek the approval of Crump for those appointments he wished to make. The U. S. Marshall for the Western District of Tennessee was McKellar’s protégé Bert Bates, who was loathed by the Memphis Boss. Naturally, Burch Biggs was an avid supporter of Senator McKellar. During McKellar’s 1946 race for reelection, the senator handily defeated a challenger who had quite nearly beaten his junior colleague four years earlier. The vote tally in Polk County inside the Democratic primary in 1946 was 3,689 for McKellar and 124 for Ned Carmack. McKellar had roughly 97% of the ballots inside the Democratic primary.

Burch Biggs was also genuinely aligned with fellow political boss E. H. Crump of Memphis. Biggs never forgot the aid he had received from the Shelby County legislative delegation when he sought help in the legislature to redistrict Polk County, giving it a Democratic majority on the county court (the equivalent of the county commission today). Biggs credited the Shelby County legislative delegation’s political aid to Crump and the two men remained allied until their respective deaths.

Biggs won his first election as sheriff of Polk County in 1904 when he was thirty years old. Almost immediately, Sheriff Biggs was faced with the prospect of apprehending one of the most infamous criminals of the day. Garrett Headden was from the colorfully named Greasy Creek area in the Kimsey Mountains. Headden was a prolific killer, charged with no less than nine murders. In later years, Burch Biggs recalled, “He had threatened to make me the tenth.”

Biggs sought help from Pryor Watson, sheriff of the adjoining Monroe County and the two formed a posse of six men who eventually tracked Garrett Headden to Headden’s home and still. The two sheriffs and the posse had the help of a guide who promptly ran off when Biggs faced the door of Headden’s cabin with a rifle and waited for the killer to emerge. Headden walked out, saw the armed men, turned toward the doorway and attempted to dart back inside but was killed in a hail of bullets. Sheriff Biggs was widely acclaimed by the people of Polk County as one who would serve any warrant.

At the time, sheriffs in Tennessee served two-year terms and could seek three two-year terms before being ineligible to run again. A sheriff could run again after having sat out for a term or more. Burch Biggs was reelected in 1906 but upset when seeking a third term in 1908. Biggs went to Etowah in neighboring McMinn County where he served as the chief of police in 1909 and 1910. Burch Biggs was felled by illness and took to his bed. There were those who believed Biggs would never recover, but he did get well and worked to build his family’s financial security and rebuild his own political fortunes. Biggs owned a large farm and an impressive herd of cattle. In fact, Burch E. Biggs made a political comeback to be elected sheriff of Polk County again in 1914. Biggs served only the single term, but he was hardly done with politics.

Burch Biggs made another political comeback in 1930 as the Great Depression began to take hold. Biggs had helped any number of families suffering through the Depression by slaughtering cattle and bringing them dressed beef so the family would have enough food to eat. Grateful families made grateful voters. Biggs was elected sheriff once again in 1932 and thereafter some journalists referred to Polk County as “Biggs County” and reelected again in 1934. As for Sheriff Biggs, he didn’t much care for wandering journalists who strolled into his domain. One reporter for the Chattanooga Times was placed in a deputy’s car and dumped out at the county line. Evidently, that particular reporter had written several stories that Burch Biggs didn’t much like.

A reporter for the Knoxville News-Sentinel who had known Burch Biggs his entire life thought he might have better luck when he visited Polk County. The reporter intended to cover a simmering feud occurring at the Polk County Courthouse in Benton. That reporter was grabbed by the arm by Sheriff Biggs and taken to the sheriff’s office where he remained for some time. After an hour of cooling his heels inside the sheriff’s office, Biggs decided the prank had sunk in and took the reporter to his home. There Burch Biggs showed the News-Sentinel reporter the Biggs family album and happily discussed his heritage.

One of Biggs’ most prized possessions was a medal presented to him by the Tennessee State Legislature following his service as a Sergeant-at-Arms, which was inscribed, “Presented to Burch Biggs, the All-American Sheriff.” That medal dangled from Biggs’ watch chain for the rest of his life.

Like the leader of any political faction, verbal brickbats were frequently thrown at Burch Biggs. One of the sheriff’s most vociferous foes was John Jennings Jr., the congressman from Tennessee’s Second Congressional District from 1939 – 1951. Jennings routinely assailed Sheriff Biggs and the political machine that dominated Polk County throughout much of his time in Congress.

Ineligibe to seek reelection as sheriff in 1936, Biggs preferred instead to run his eldest son, Broughton. Brought Biggs served until 1942 when Burch Biggs reclaimed the office and was reelected in 1944. After being reelected for the last time, Burch Biggs resigned his office and the Polk County Court appointed his younger son and namesake to the office.

Ironically, 1948 is the year in which the McKellar-Crump axis was defeated in a statewide election and it was also the same year when the Biggs machine was toppled in Polk County. A combination of returning veterans and Republicans had waged the famous “Battle of Athens” in McMinn County to restore order and good government. That same combine of Republicans and the Good Government League ousted Burch Biggs Jr. as sheriff in the 1948 election.

The old former sheriff snapped, “I am not afraid,” when several hundred Polk County citizens marched on the courthouse in 1948. Burch Biggs noted he had “whipped that crowd three or four times before.” The situation in Polk County was so tense, according to contemporary news reports at the time, a single shot fired would have ignited a bloody confrontation that could well have left numerous dead and wounded. The Biggs machine was withholding poll tax receipts, which were required to be able to vote. The Good Government League was rumored to be considering storming the Polk County Courthouse to begin issuing poll tax receipts. The elder Biggs was determined to see his son Burch Glenn Biggs elected sheriff. Attorney General R. Beecher Witt in Madisonville told members of the press he had tried for two days to have the Biggs machine start issuing poll tax receipts in a futile attempt to “ease the crisis and avoid bloodshed.”

“I’ll give a $1,000 reward to anybody who can produce a Polk County tax receipt of any kind issued for this year,” Burch Biggs declared. “Neither side has a poll receipt – – – and my side must have poll taxes before it can vote, too.” Watching some 250 voters marching to the trustee’s office to pay their poll taxes and get a receipt, Biggs dismissed it, saying, “They’re just advertising.”

County Judge Vance Davis had apparently switched sides and joined with the Good Government League. Asked by a reporter when Judge Davis had abandoned him, the crusty former sheriff snarled, “Don’t know when he did, but that’s what the boys tell me. He was on my side when he wanted to be elected county judge.”

Biggs’s political sagacity had not dimmed with the years. The former sheriff told a visiting reporter he thought Congressman Estes Kefauver would win Polk County in the coming 1948 Democratic primary for the United States Senate. Biggs stated he believed Circuit Judge John A. Mitchell of Cookeville would run second and incumbent Tom Stewart third. Biggs’ prediction was exactly accurate. Kefauver was highly critical of the Crump machine, which was supporting Judge Mitchell, but he neglected to say nary a bad word about the Biggs machine which was supporting him in Polk County. Politics does indeed make strange bedfellows.

Bloodshed did occur with the fall of the Burch Biggs machine in 1948. Three men were killed in Polk County by Election Day and others were wounded. For the first time in more than twenty years, no member of the Biggs family’s name was on the ballot for sheriff in Polk County. Sheriff Burch Glenn Biggs was in bed having been felled by a serious heart attack. His father said it would take quite some time before his son would recover.

The “Old Sheriff” as many in Polk County referred to the elder Burch Biggs was running for reelection to the Democratic State Executive Committee in the August primary. There was trouble at the Turtletown precinct where twenty-eight-year-old Donald Lands was shot to death. According to Biggs, Lands was killed in an ambush while thirty-two-year-old Edwin Shearer was in critical condition after having been shot in the head. Shearer’s father James was a Biggs candidate for justice of the peace. State Troopers poured into Polk County to prevent further violence and guardsmen literally brandished bayonets to protect ballot boxes. The power of the Biggs machine was broken and their candidates were uniformly swept out of office or defeated.

The “Old Sheriff” lived six more years, suffered a heart attack and finally died of a kidney ailment at age eighty. Oddly, Burch Biggs and E. H. Crump died within months of one another.