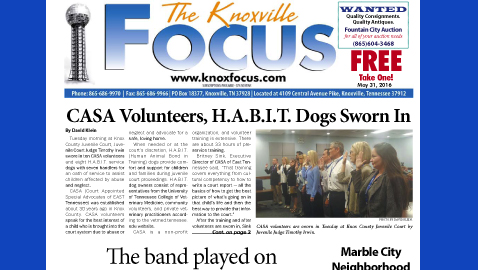 CASA (Court Appointed Special Advocates of EAST Tennessee) was established about 30 years ago in Knox County. CASA volunteers speak for the best interest of a child who is brought into the court system due to abuse or neglect and advocate for a safe, loving home.

When needed or at the court’s discretion, H.A.B.I.T. (Human Animal Bond in Training) dogs provide comfort and support for children and families during juvenile court proceedings. H.A.B.I.T. dog owners consist of representatives from the University of Tennessee College of Veterinary Medicine, community volunteers, and private veterinary practitioners according to the vetmed.tennesee.edu website.

CASA is a non-profit organization, and volunteer training is extensive. There are about 33 hours of pre-service training.

Britney Sink, Executive Director of CASA of East Tennessee said, “That training covers everything from cultural competency to how to write a court report — all the basics of how to get the best picture of what’s going on in that child’s life and then the best way to provide that information to the court.”

After the training and after volunteers are sworn in, Sink said, “We ask that they commit to service for at least one year. We put a lot of resources and time into training volunteers because it is such important work. We do a big job with a small organization.”

“We say volunteers can expect to give 10-15 hours a month,” Sink added. “It varies depending on a case.” If they need to, Sink said volunteers can take a break between cases.

Dave Hall, one of the CASA volunteers sworn in on Tuesday, said he is happy to help the CASA program. “I’m brand new. I just finished the training,” he said.

“The big thing we do, in some cases we are the unaffiliated, unbiased advocate for the child,” Hall said. “Our purpose is to advocate forcefully for the child. We are a way for the court to get a sense of what is happening in the home,” Hall emphasized.

Hall became aware of CASA by noticing a flyer in a restaurant. His wife is also participating in the program and began several months ago.

“The hard part will be knowing that I can’t by myself fix the situation for the child,” Hall said. “If I have done my job well, I will know I have made the child’s life better.”

“They want to make sure if you take a case, you follow it through to completion,” Hall said of volunteering for CASA. “I anticipate doing it for as long as I am physically able,” he added.

Judy Miller, another CASA volunteer sworn in Tuesday, said she had been on the Foster Care Review Board for many years and had seen kids facing difficult situations and that led her to volunteer for CASA. “It was a great group of volunteers,” she said. “People brought to the table a wide variety of skills. I think at the heart of it is a group of people that really wants to help children and make sure that children are in a safe environment.”

Speaking of the partnership that CASA has with the H.A.B.I.T. dogs, Sink said, “We have a fairly new collaboration with H.A.B.I.T. They come every week on Wednesday mornings. They can also be requested by someone involved with a case.  A lot of times adults nearby are getting therapy from the dogs as well,” she said.

Brandi Murrell, a H.A.B.I.T. volunteer, said her dog’s name is Foxy Sassafras. She described Foxy as a Yorkshire Terrier mixed with either Cairn or Norwich Terrier. “I thought this was a great opportunity for her to be around kids and make a positive difference for some kids and some parents at a difficult time,” she said. “It also makes the dogs really happy. It makes me really happy. It’s just a really good program in general.”

Hall mentioned the large caseload that CASA sees. “There are more cases than we can handle,” Hall said. “We need the help.”

Visit casaofeasttn.org/volunteering for information on how to become a volunteer.