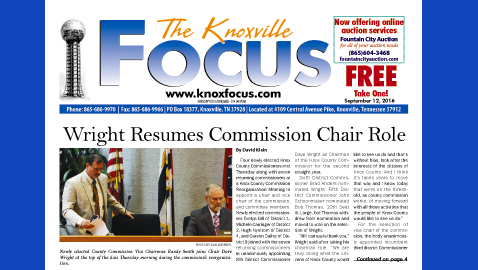 For the selection of vice chair of the commission, the body unanimously appointed incumbent third district Commissioner Randy Smith following Nystrom’s move to nominate him.  Dailey nominated current vice chair Thomas to another term, but Thomas again withdrew his nomination and made a motion to appoint Smith.

Commission Chairman Wright leads the Development Corporation Board, and Vice Chairman of Knox County Commission Smith is the vice chair of the board.

“Fourteen schools. We have lots of work to do in the Joint Education Committee,” she said. “We have new board of education members. You’re looking at four new members who were just elected; you have a new superintendent within the next two years and an interim superintendent. New faces and a new agenda. So we love education because it impacts everybody. It’s going to be a good commission.”

Wright will lead the TPO. The Arena Use Committee has three commissioners, Brantley, Schoonmaker, and Thomas. The Audit Committee will be led by Schoonmaker, Wright, and Nystrom.

Schoonmaker will head the Ethics Committee and Carringer the Employee Insurance Benefits Committee.

Prior to the reorganization meeting, Knox County Mayor Tim Burchett served Chick-fil-A breakfast in his office to commission members.