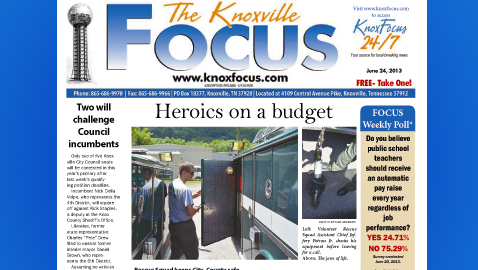 Heroics on a budget

From performing harrowing water rescues under the Gay Street Bridge to using the Jaws of Life to free a car-trapped victim in Farragut, the Knoxville Volunteer Emergency Rescue Squad responds to a variety of lifesaving situations that both the Knoxville Fire Department and Rura/Metro do not. The rescue squad responds to water rescue, vehicle entrapment, and confined space rescue, among others. The heroes who perform these actions are volunteers who receive no pay, and the organization operates on a shoe string budget. Yet with all these obstacles, this organization of dedicated citizens somehow finds a way to make it all work.

I spent the day with Assistant Chief Jeffery Petress Jr. last week, having met him at a Knox County Commission meeting a month ago. During this particular meeting, his department pleaded with the County Commission for $100,000.00 to buy a new rescue truck. Currently many of the rescue trucks have well over 100,000 miles. (Chief Petress’s vehicle has over 200,000 miles.)

For years the volunteers have been working with what meager means they have. However, going forward the organization is looking to no longer just survive but to thrive.

Each volunteer dedicates approximately 760 hours a year to the rescue service for training. That includes everything from being on call to other time consuming activities. The notion of the rescue volunteers spending additional time begging the community for money is a very serious possibility that worries the Assistant Chief.

“The one thing people fail to realize is that we, as volunteers, save the taxpayers almost $3 million dollars a year. We have a total budget of about $350,000 a year,” Petress explained.

During my tour of each rescue station in Knox County, I noticed how professional this volunteer organization is. I also noticed how far they have come as an organization and how much further they could go if they received additional financial resources. Examples include rooms unfinished, aging rescue vehicles, few incentives, and other challenging problems associated with having such a small budget.

Interestingly it is not just government funding that concerns these volunteers. They are also worried about funding from United Way. With businesses struggling and cutting back donations, the volunteers are worried that they might receive additional cuts. Surprisingly, the organization receives very little support from the business community. When I asked Chief Petress if they have a rescue squad member of the month, he said no. He explained that the department receives very few donations from the business community. He further explained how he wishes that he could provide more enticing rewards to the volunteers. Incentives he envisions include possibly offering the volunteer with the most hours a trip to a rescue convention that is out of town but close, low cost, and enjoyable.

Based on my observations, the department can no longer just manage to scrape by. Our community as a whole has to address this issue. In a county where we have groups that save everything from “save our schools” to “save the Smokies,” We need to save the organization whose volunteer’s sacrifice their time to save our lives.

For more information about the Knoxville Volunteer Emergency Rescue Squad, including how to help, join or donate, visit http://kvers.net/ or call (865) 546-4824.