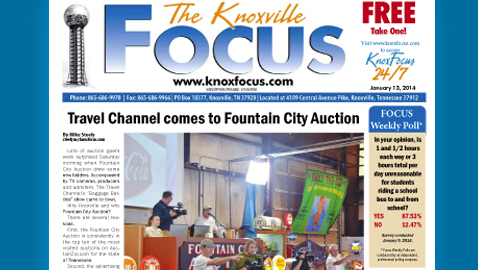 Why Knoxville and why Fountain City Auction?

There are several reasons.

First, the Fountain City Auction is consistently in the top ten of the most visited auctions on AuctionZip.com for the state of Tennessee.

Second, the advertising items, more than 600 of them, were being sold to the highest bidder in Saturday’s 9th Annual Advertisement Auction.

Greg Lawson, Fountain City Auction’s owner, said he was contacted more than a month ago by the show’s producers. He had originally planned to hold the “Advertising” item auction on his regular Friday night event but he adjusted his schedule to facilitate the show’s production schedule.

The show producers then looked at some of the items already arriving at the Central Avenue Pike auction house and Lawson told them he had “stuff coming in daily.” Last week he said he still had requests but could not accept any more items.

The auction house was packed with oil company signs, a classic juke box, a vintage Coke machine, and numerous other advertising-type items.

The inquiry from show producers moved to a three-way call between Lawson and the producers and another “Baggage Battles” producer came to Knoxville and was very impressed.

The TV show features three teams of “character” bidders who battle each other over items in auctions. The three bid against not only each other, but against locals as well.

While he didn’t announce that the Travel Channel’s show would be shooting there, Lawson said he sent out an enormous email blast to promote the Advertising Auction.

Saturday began with heavy rain and it looked, for a while, like the turnout was going to be light. But people kept pouring in before and after the 10 a.m. start. The “Baggage Battles” personalities Mark Meyer, Billy LeRoy, and Lawrence and Sally Martin were talking to the cameras prior to the auction near items that they were interested in buying. They were also meeting Knoxville area attendees, posing for photos, and touring the displays.

Lawrence Martin said that it was his first trip to Knoxville but that his wife has relatives here, so the couple got a tour of the town on Friday. He seemed especially interested in one piece and bid on it during the auction. You’ll have to watch the show to see who bought what and how much they paid. Martin did say, before the auction, that he tries to buy things that he can resale. Sally Martin said that the larger items the bidders buy are shipped to them courtesy of the production company.

Yon Motskin, executive producer of the show, called The Focus from his New York office and said the Knoxville auction would probably air sometime Mid-April through early July but added that the show schedule is a decision that The Travel Channel makes.

“We usually produce two shows a month, sometime three or four. We’ve shot in Tennessee before, twice in Nashville, and we have plans to return to Nashville this year,” he said.

He also said the show picks professional people to be bidders, hoping they have a personality that works. He said that, in Knoxville, they have 14 production people not counting the three teams of bidders, and he sent in 12, hired two local shooters, and one local sound person.

Speaking of the bidders Motskin said, “This is what they really do for a living.”

My Tupelo Entertainment produces “Baggage Battles” and also produces various other shows, including “Ghost Adventures” and “King of Vegas.” The shows air on various television networks.