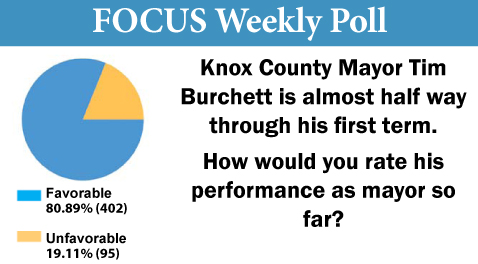 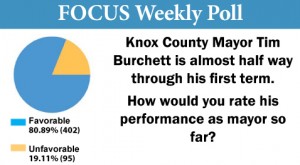 Knox County voters elected Mayor Tim Burchett with 85% of the vote and looking at the results from this week’s Focus poll, the Mayor remains highly popular. Mayor Burchett was opposed to the tax increase demanded by School Superintendent James McIntyre and apparently Burchett’s position is very popular with the public.

Voters were asked, “Knox County Mayor Tim Burchett is almost halfway through his first term. How would you rate his performance as mayor so far?” Voters had the option of selecting favorable or unfavorable. More than 80% of respondents have a favorable opinion of Tim Burchett’s performance as mayor thus far. Every age demographic gave Burchett high marks; slightly more women than men gave Burchett higher approval as mayor. The district with the lowest favorable opinion of Burchett was the First District, which is wholly inside the City of Knoxville.