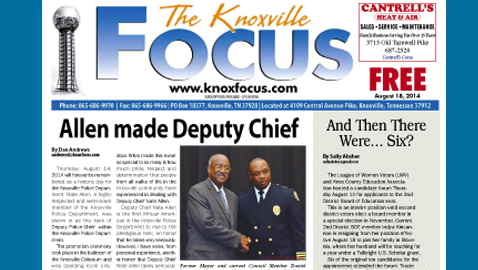 The promotion ceremony took place in the ballroom of the Knoxville Coliseum and was standing room only. The line to greet Allen and shake his hand was out the door. What made this event so special to so many is how much pride, respect and determination that people from all walks of life in the Knoxville community have experienced in dealing with Deputy Chief Nate Allen.

Deputy Chief Allen started in Knoxville as a reporter for WBIR in the 1980s, which may well be why he is so respected by the Knoxville media. I can personally attest to the high level of professionalism and respect that the Deputy Chief has always extended towards me as a person and a journalist. I feel that this is important to note considering what is currently going on around the country. While other communities have made headlines for Police Departments clashing with reporters, that almost never happens in Knoxville. Part of the reason for that is because of members like Deputy Chief Allen, whom former Chief Sterling described as “very steady, dependable person who could be placed in almost any situation and he would give you his best and do it appropriately.”

Former County Commissioner Diane Jordan summed it up perfectly when she stated the following: “I have known Nate Allen for over 20 years, and he has always been there for the community, especially the youth of Knoxville. Anytime, we as a community had an issue, problem, or a solution, Nate would always be ready to help and see the project through to completion. Nate has made Knoxville a better place and in his new position as Deputy Chief I firmly believe will make Knoxville an even greater place!”