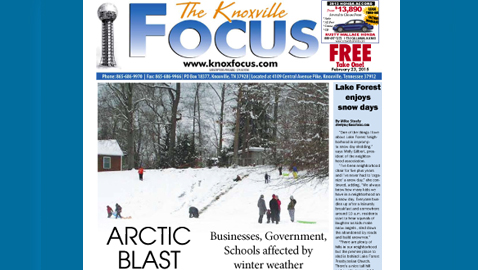 By far the biggest news story last week was the freezing weather. It touched everyone and was harsher on some than others. It was a week that will be remembered for a long time.

Last Monday and Monday evening was a nightmare of freezing rain and sleet here in Knoxville and everyone awoke Tuesday morning to 12 degrees and the aftermath of the storm.

The governors in Tennessee and Kentucky declared a state of emergency. The ice storm was followed by snow and then capped with more ice, bringing down tree limbs and some power lines. Tuesday morning the electric repair trucks were out in the area restoring power where they could reach problems on ice-covered streets and roads.

The Great Smoky Mountain National Park closed not only the road across the mountain but the visitor center and the park.

Shelters were opened across the region by the Red Cross including at least two in Knox County. Some neighborhoods in town were without power and a sunny Tuesday did little but thaw the top layers of the ice and snow. By Tuesday night much of the melted ice on the roadways refroze, creating black ice and slippery travel.

The National Weather Service announced that more ice and snow were expected Thursday and Friday with highs only reaching into the teens and the lows near zero. About 20,000 homes in Knox County lost power and crews worked all day Tuesday and Wednesday restoring power.  The repairs continued through Thursday and Friday.

While Knox County Schools were closed for Presidents Day on Monday, it became obvious by early that  afternoon that the ice was coming and county schools were called off for Tuesday. With temperatures not expected to rise above freezing the rest of the week the possibility of opening schools was, on Tuesday, in doubt.  By 4 p.m. that day, the school system announced schools would also be closed Wednesday as well.

By Wednesday afternoon Superintendent James McIntyre tweeted that due to the weather the Knox County Schools would remain closed for the rest of the week.

At least three members of the Knoxville city council office stayed overnight at the City-County building, sleeping where they could. The city was considering sending the street department out to collect city council members in order to get a quorum for the regular meeting Tuesday evening but all of the council showed up for the session.

At the Tuesday night meeting Mayor Madeline Rogero recognized the efforts of the Public Works Department in spreading 1,430 tons of rock salt and more than 33,000 gallons of brine on city streets. She said the city crews responded to 85 tree falls and tree limbs falling on streets and noted that KAT kept buses running on the limited schedule and routes.

“The unsung heroes,” she said, “were the two payroll clerks who slept here to make sure that everyone got paid.”

The Knox County Commission called off its Tuesday work session and announced it would reschedule before its Monday, February 23 regular meeting. However the weather continued and it appears the commission will meet in regular session today without the prep meeting.

On Tuesday Knox County Mayor Tim Burchett cancelled the called meeting of the E911 committee, scheduled for 8 a.m. Wednesday. The mayor’s office was searching for a time to hold the meeting when the members were available.

The city’s 311 telephone number was busy Monday and Tuesday with some 820 calls, about 100 more than usual, many about downed trees and power lines.

The Arts and Cultural Alliance cancelled the Wednesday Arts Professional Development Seminar and many other organizations cancelled meetings. The busiest people in our community were the salt truck operators and street plow operators.

Many businesses across Knox County shut down about mid-day Monday as the sleet and ice began. Despite the de-icing trucks salting the streets the day before, the roads soon iced over.

The University of Tennessee closed down Monday afternoon and announced it would reopen after 10 a.m. Tuesday. Despite snow and ice the main campus was open and operating Wednesday.

Wednesday morning Mayor Rogero announced more street service and said that garbage collection would take place as long as possible. KUB announced there would be no disconnects for non-payment until the weather clears. Knox County Schools and those in surrounding counties remained closed. The superintendent became a smiling image posted by students on the internet with winter scenes and happy students in the background.

Snow and Ice also caused the cancellation of the Knox County Board of Education meeting Wednesday.

Thursday and Friday morning Knox County residents awoke to the coldest mornings on record and some were still without power. The Knoxville Historic Zoning Commission called off their meeting and some businesses that had opened the day before closed again. While the interstate and the main routes remained useable, many side streets were still slippery.

TVA reported that Wednesday night was the highest electric use ever in the month of February and asked everyone to turn their thermostats down a degree.

The five degrees Thursday morning felt like it was below zero. UT classes opened despite the weather. Most of the electric outages were in surrounding counties and in Knox County mostly were in the south portion. KUB reported the outages in their system were down to about 300 homes.  By noon the temperature rose only to 10 degrees.

Last week local merchants reported selling a large number of sleds as out-of-school children ventured out of their homes and found a nearby hill to work off some of their energy. Their parents probably spent much of the week scraping ice from their cars and trucks, several times.

Weather related wrecks were reported on I-81, I-40, and I-75 and at least one death in Knox County was reported due to the weather. By Thursday most of Florida was in the mid 20’s and Niagara Falls was reportedly frozen.

Thursday morning it was discovered that three people died in a house fire off Callahan Drive on Keck Road.  The victims were two elderly people and their disabled adult son. While no cause has been determined many people without power have been using alternative heat sources such as fireplaces or propane heaters.

Despite the freezing weather many people ventured out Thursday morning with most major roads clear. Many found business parking lots partially cleared but ice remained in areas that had not been salted or were in the shadows. The city’s Board of Zoning Appeals met despite the weather and the meeting was packed with applicants who also braved the very cold temperatures.

Friday night and Saturday the forecast was rain and snow with the area warming to the 40s on Sunday.  Early Friday broke records for lowest temperature and many people woke to find the plumbing frozen in their homes.