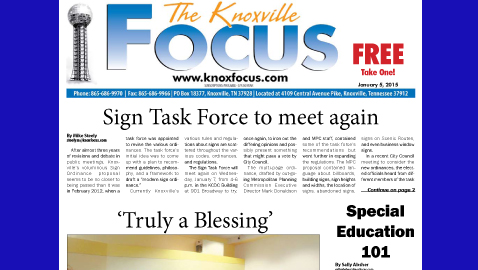 After almost three years of revisions and debate in public meetings, Knoxville’s voluminous Sign Ordinance proposal seems to be no closer to being passed than it was in February 2012, when a task force was appointed to revise the various ordinances. The task force’s initial idea was to come up with a plan to recommend guidelines, philosophy, and a framework to draft a “modern sign ordinance.”

The Sign Task Force will meet again on Wednesday, January 7, from 4-6 p.m. in the KCDC Building at 901 Broadway to try, once again, to iron out the differing opinions and possibly present something that might pass a vote by City Council.

In a recent City Council meeting to consider the new ordinances, the elected officials heard from different members of the task force, each with a different view. The Sign Task Force was frustrated that the MPC proposal wasn’t what it had proposed; the MPC was frustrated that the council had postponed the matter many times; and the Knoxville Neighborhood Advisory Committee proposed only going with proposals made by Scenic Knoxville which were much more stringent.

When the council sent the proposal back to the MPC without any action and requested the planning staff review and revise the recommendations, the MPC basically turned away and suggested that, after all the public meetings, the work by the Task Force, and the hours spent by the MPC, that the entire revision of existing ordinances be turned over to an outside consultant.

In a letter to MPC in November, Grieve reminded them that what the Task Force had sent was a status report and not a recommendation. The Task Force, in their July meeting, voted to suspend its work because they could not reach a consensus on several items. Feld and McAdams voted “No” but majority ruled and the work was stopped. Their report went to MPC with the understanding that the MPC or City Council might submit recommendations and the Task Force would reconvene.

The only consensus reached by the Task Force dealt with the height of detached signs, suggesting a 30-foot height limit.