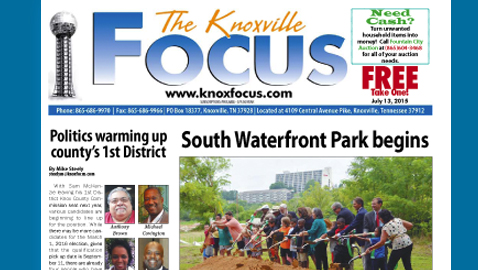 The ground was broken for the Suttree Landing Park Tuesday for what will eventually be part of a 3-mile long River Walk, stretching along the south side of the Tennessee River. The River Walk will connect the City View development and the former Baptist Hospital to the park, the first new city park in ten years.

Mayor Madeline Rogero said that the park idea began in 2009 and the park is named for a fictional character, Cornelius Suttree, created by author Cormac McCarthy. By a large margin the name was selected during an online poll and then approved by the Public Properties Naming Committee.

The 8.25-acre park runs along the river and completion is expected in about a year and will include a portion of the new Waterfront Drive, a new 2,988-foot-long tree-lined street. It is estimated that the entire River Walk may take ten years to be completed from one end to the other.

Suttree Landing Park should spur development in the area and Rogero recognized the efforts of Michelle Foster, Deputy Director of Redevelopment, and Joe Walsh, Director of Parks and Recreation. She applauded the work of the city staff for cutting through major construction challenges and small details. The $6.6 million project will include private redevelopment projects which will contribute to create one mile of a new waterfront greenway.

She said the park will offer unique amenities with well-designed features and should become a favorite spot for outdoor recreation. The park is located 1.5 miles east of the Gay Street Bridge, just east of Barber Street. It will feature a festival lawn, children’s playground, an accessible boat dock, a put-in ramp, river overlooks and parking.