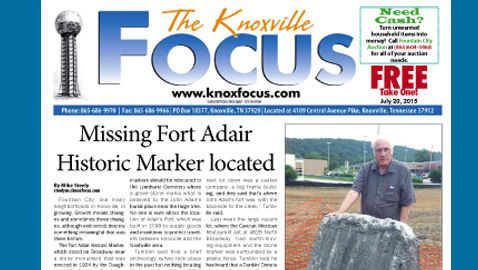 Fountain City, like many neighborhoods in Knoxville, is growing. Growth means changes and sometimes those changes, although welcomed, destroy something meaningful that was there before.

The Fort Adair Historic Marker, which stood on Broadway near a stone monument that was erected in 1924 by the Daughters of the American Revolution, vanished last week. An inquiry has been conducted and historian Jim Tumblin is discussing the possibility of relocating the large monument stone and historic marker.

The matter came up at the monthly meeting of the Fountain City Town Hall. Following the meeting Tumblin and I drove over to the former site of the historic marker and found only the stone monument. The lot behind, next to the Long John Silver’s Restaurant, has been totally graded in preparation for future businesses.

There’s no evidence now of the once noted marker and a plastic net surrounds the DAR marker.

Tumblin said that both markers should be relocated to the Lynnhurst Cemetery where a grave stone marks what is believed to the John Adair’s burial place near the large tree. No one is sure about the location of Adair’s Fort, which was built in 1788 to supply goods and munitions to protect travelers between Knoxville and the Nashville area.

Tumblin said that a brief archeology survey took place in the past but nothing locating the fort was found. He said that a descendant said the fort was between two springs. When the Lynnhurst Cemetery was being established, several human bones were discovered and reburied on the knoll beneath the large tree on the eastern boundary of the graveyard just above the creek. The graves were marked as that of John Sevier and his family but some descendants disputed that grave site.

“Old timers would say that where Arby’s sits now the next lot down was a casket company, a big frame building, and they said that’s where John Adair’s fort was, with the backside to the creek,” Tumblin said.

Last week the large vacant lot, where the Cancun Mexican Restaurant sat at 4829 North Broadway, had earth-moving equipment and the stone marker was surrounded by a plastic fence. Tumblin said he has heard that a Dunkin’ Donuts shop may be going in the site.

An employee at the Long John Silver’s restaurant next door said that he witnessed a backhoe and a KUB truck there before the sign disappeared.

KUB reported that they didn’t remove the sign and said the developer may have removed it. After a search by The Focus, an inquiry with the Tennessee Department of Transportation’s Knoxville office located the sign.  A spokesperson for TDOT said it was removed because of work being conducted at the location and the sign will be put back up when construction is completed. Meanwhile the historic marker is being stored at the TDOT office at 7345 Legion Lane.