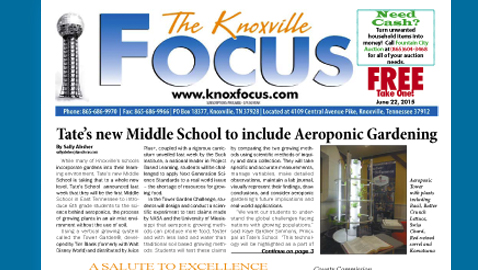 While many of Knoxville’s schools incorporate gardens into their learning environment, Tate’s new Middle School is taking that to a whole new level. Tate’s School  announced last week that they will be the first Middle School in East Tennessee to introduce 6th grade students to the science behind aeroponics, the process of growing plants in an air mist environment without the use of soil.

Using a vertical growing system called the Tower Garden®, developed by Tim Blank (formerly with Walt Disney World) and distributed by Juice Plus+, coupled with a rigorous curriculum unveiled last week by the Buck Institute, a national leader in Project Based Learning, students will be challenged to apply Next Generation Science Standards to a real world issue – the shortage of resources for growing food.

In the Tower Garden Challenge, students will design and conduct a scientific experiment to test claims made by NASA and the University of Mississippi that aeroponic growing methods can produce more food, faster and with less land and water than traditional soil based growing methods. Students will test these claims by comparing the two growing methods using scientific methods of inquiry and data collection. They will take specific and accurate measurements, manage variables, make detailed observations, maintain a lab journal, visually represent their findings, draw conclusions, and consider aeroponic gardening’s future implications and real-world applications.

“We want our students to understand the global challenges facing nations with growing populations,” said Kaye Gardner Simmons, Principal at Tate’s School. “This technology will be highlighted as a part of our STEAM curriculum. Students will present their findings to a panel of community experts in the culinary, agricultural and environmental fields.”

Aeroponic gardening is becoming more popular as agricultural land uses must compete with developers for limited open space. The Tower Garden technology is being showcased in venues across the United States such as Chicago O’Hare’s Urban Garden and the University of Florida Research & Education Center. Restaurants like the Bell, Book & Candle in New York City have installed 60 Tower Gardens on their urban rooftop to supply fresh vegetables and herbs on a daily basis.

Paula Tate-Gunter, Tate’s Wellness Director, said, “Embracing eating fruits and vegetables and teaching children how to choose healthy foods, is a very important part of Tate’s School. This technology works hand-in-hand with our student teaching garden and apple orchard activities on campus. Students love to sample what we grow and this is a new way to experience foods.”