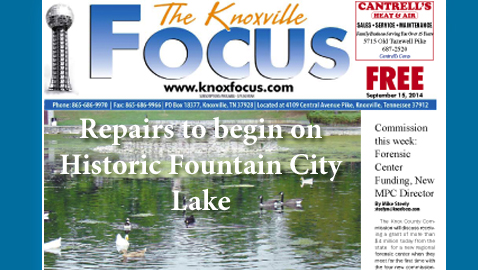 Link for pdf below story.

After over at least 15 months, the draining of Historic Fountain City Lake will begin Thursday and plans are to start repair work on the leaky landmark next Monday.

“We had a meeting today (Sept. 11) with the contracting company (Claiborne Hauling),” said Joe Walsh, the City of Knoxville Parks and Recreation Director, “They are tentatively scheduled to start repair work Sept. 22.”

Walsh said his “first remembrance” of the Lake having issues was June of 2013. “It’s been a couple of summers.”

The problem with the Lake, Walsh said, is with a leaking “weir plate,” an outlet in the southwest area of the Lake close to where Cedar Lane and Broadway come together. The metal plate will be replaced and leaky holes in that area will be repaired, he said.

Algae currently covers approximately 80 percent of the Lake. The water fountain on the island near the center of the Lake has been turned off for months.

The draining process of the Lake, which is referred to and known more by local citizens as “the Duck Pond,” will start Thursday, said Walsh, and workers from the Tennessee Wildlife Resource Agency are coming in Friday to remove and relocate fish from the Lake.

The Fountain City Park and Lake are maintained by the Fountain City Lions Club. The City of Knoxville is assisting with the current major project and has appropriated $250,000 in its budget for such.

After the repair work is completed and the Lake is restored, the City of Knoxville will hire an environmental engineering firm to implement a long-term management plan, so the lake will be maintained properly and current issues will be avoided in the future, Walsh said.

Daniel Dunn, Chairman of the Fountain City Town Hall, stated via e-mail: “Obviously, it was disturbing to see the condition of Fountain City Lake deteriorate so rapidly over the past year. The Lions Club works diligently and does a great job maintaining both the Lake and Fountain City Park. The issues with the Lake were just too significant and additional assistance was required from the City.

“Once this cleanup project is completed with the assistance from the City of Knoxville,” continued Dunn, “it is definitely my hope that the private citizens and organizations in Fountain City will band together to support the Lions Club with the ongoing maintenance of Fountain City Lake and Fountain City Park. We take pride in both of these landmarks in our community and should share in the responsibility of their care.”

Walsh said he’s already heard from churches, local businesses and citizens in the area who are willing to step in and do what’s needed to help it remain a viable park.

The Lions Club led a fundraiser to refurbish and clean the Lake in the mid-1980s.

But now, “It’s the worst I’ve ever seen,” said Alvin Frye, longtime Lions Club member who has been familiar with the Lake since coming to Fountain City in 1956.