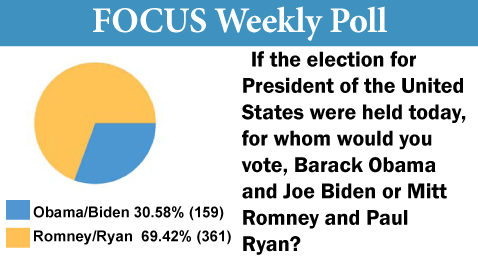 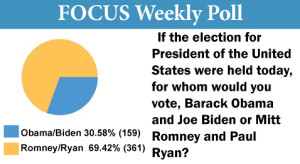 Mitt Romney has increased his lead since The Focus conducted its first poll on the presidential race in Knox County. Likely voters were asked the question, “If the election for President of the United States were held today, for whom would you vote, Barack Obama and Joe Biden or Mitt Romney and Paul Ryan?”

The Romney-Ryan ticket was favored by almost 69.5% of respondents. Only in the first district did President Obama receive a majority of those responding to the poll. The First District is inside the City of Knoxville and is the heart of the African-American community. Almost 71% of respondents said they would vote for President Obama.

Other voters inside the City of Knoxville did not share the same enthusiasm for the President as the First District. In the Second District, more than 70% said they would vote for Mitt Romney. The percentage of support for Romney fell in both the Third and Fourth Districts, but both districts posted more than 66% of those responding for the former Massachusetts governor.

Once outside the city limits, Romney’s margins appear to pick up slightly. Fifth District respondent favored Romney by more than 71% and the Sixth District posted an almost identical margin.

The Ninth District, which is South Knoxville, saw the biggest margin for Mitt Romney in the entire county with almost 80% of voters saying they would vote for the former governor.

The Romney-Ryan ticket won every age group, including those 18-29. Obama saw his greatest support in that age demographic, with 40% of those responding saying they would vote to reelect the president.

More women than men favored President Obama, but in Knox County, it was only by a fraction.