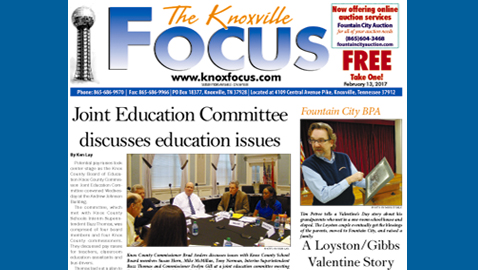 Thomas laid out a plan to raise teachers’ salaries by an estimated $10 million (an increase of four percent). The interim superintendent also noted that approximately $4 million would be covered by Governor Bill Haslam’s proposed education budget increase that would raise teacher pay throughout the state.

“I think we can afford it,” said Commissioner Brad Anders. “I want to make sure. They say we can afford it, but I’d really like to see the teacher raises be along the lines of the classroom teachers and not as much into the administration because we’re continuing to feed that.”

The commission and the school board must come up with the remaining $6 million to cover the increase in teacher salaries.

The committee also discussed a legislative priority that would again reform the teacher evaluation process.

“This is a very demanding position and the education assistants have to go through tests to be certified just like we do as teachers,” said Gill, who was named a committee co-chair along with Fugate.

“They make $16-18,000 a year and you have people who have been in the classroom for 25 years and their salaries haven’t been adjusted for inflation.

“Their salary is so low, that if they purchase benefits, they don’t have any money left to live on.”

“The salaries [for education assistants] are shamefully low,” Thomas said. “[The pay] is so low that when they buy their family health benefit they don’t get any money at all because the benefit is bigger than their salary.”

In addition to discussion on the teacher evaluation process, the committee also discussed opposing school vouchers and revisiting a statute that mandates that property tax revenue remain level after appraisals.

Thomas also said there is a need for salary increases for the drivers.

“They make $12-16 an hour and it’s a long day,” he said. “It’s stressful on the roads. Our drivers drive 20,000 miles a day during rush hour. I’ve been on the buses with Mayor Burchett on those rides in the morning. It’s tough and it’s stressful because the drivers have to worry about what happens if they make a mistake.”

Thomas added that the installation of cameras has helped drivers.

“The cause of most accidents is distracted driving,” Thomas said.

“And it’s not texting. That’s against state law.

“It’s dealing with students who are misbehaving. We’ve installed cameras and that helps. Kids will be more likely to behave if they know that the principals can see what they do.”