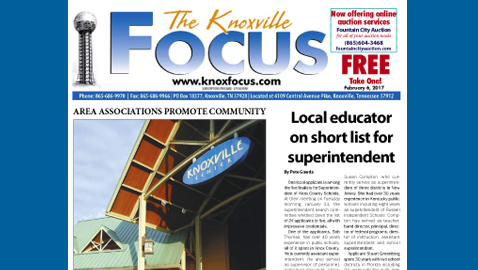 One local applicant is among the five finalists for Superintendent of Knox County Schools. At their meeting on Tuesday morning, January 31, the superintendent search committee whittled down the list of 24 applicants to five, all with impressive credentials.

One of the applicants, Bob Thomas, has over 40 years experience in public schools, all of it spent in Knox County. He is currently assistant superintendent. He also served as supervisor of personnel, personnel specialist, principal and assistant principal at Rule High School, and taught at Bearden High School and Junior High. Thomas was on each of the committee member’s short list.

Applicant Stuart Greenberg spent 30 years with two school districts in Florida including 24 years with the sixth largest school district in the U.S., Broward County, Florida.  He is currently Chief Academic Officer of Leon County (Florida) Public Schools. He also served as regional executive director and executive director for the Florida Department of Education and associate director for the Florida Center for Reading Research at Florida State University.

Duran Williams is currently employed by the Tennessee Education Association. For the past 10 years he has served that organization as statewide membership/ unified field services coordinator, assistant executive director and unified field services director. The previous 20 years he worked for Cocke County schools as literary coordinator, assistant principal and principal. In his application cover letter he listed 15 basic priorities he would use to lead Knox County Schools.

The five nominees were submitted to the entire board of education for approval at their regular meeting on February 1.