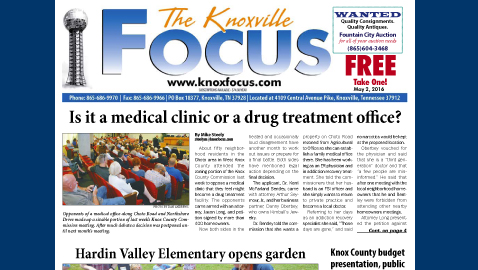 Is it a medical clinic or a drug treatment office?

About fifty neighborhood residents in the Choto area in West Knox County attended the zoning portion of the Knox County Commission last week to oppose a medical clinic that they feel might become a drug treatment facility. The opponents came armed with an attorney, Jason Long, and petition signed by more than 400 homeowners.

Now both sides in the heated and occasionally loud disagreement have another month to work out issues or prepare for a final battle. Both sides have mentioned legal action depending on the final decision.

Dr. Bentley told the commission that she wants a property on Choto Road rezoned from Agricultural to Office so she can establish a family medical office there. She has been working as an ER physician and in addiction recovery treatment. She told the commissioners that her husband is an FBI officer and she simply wants to return to private practice and become a local doctor.

Referring to her days as an addiction recovery specialist she said, “Those days are gone,” and said no narcotics would be kept at the proposed location.

Oberbey vouched for the physician and said that she is a “third generation” doctor and that “a few people are misinformed.” He said that after one meeting with the local neighborhood homeowners that he and Bentley were forbidden from attending other nearby homeowners meetings.

Attorney Long presented the petition against the zoning change signed by members of several neighborhood homeowner groups. He said adding a medical clinic on the property, Lot 19, would violate the covenants of the subdivision and, if the zoning is changed, could permit a drug treatment facility there in the future.

Attorney Seymour countered that the lot, on a round-about, is not actually part of the subdivision and not restricted by a covenant.

Long countered that Tennova has announced the opening of a clinic “across the street” at the Choto Mills complex and the Bentley medical office won’t be needed. Long also said the operating hours of the proposed clinic are in question. Seymour countered that the future Tennova clinic would only be staffed by a nurse or physician’s assistant.

Several opponents spoke and addressed a possible traffic increase on nearby South Northshore Drive, claimed the planning commission investigation was “devoid of facts,” and argued that rezoning the property would set a precedent in a neighborhood that currently does not allow commercial businesses. The MPC passed the rezoning request in an 8-4 vote after similar arguments in their meeting.

Several commissioners had questions and comments prior to voting to postpone the request for 30 days in a 6-4 vote. Commissioner John Schoonmaker, who represents the area on commission, said that he never supported a “methadone clinic” there and that he was “targeted with false statements.” He said he would support the neighborhood’s opposition and vote against the zoning for the medical clinic. Commissioners Jeff Ownby, Bob Thomas, and Charles Busler asked several questions of both sides. Commissioners Amy Broyles and Mike Brown, in a rare mutual agreement between the two, moved and seconded the postponement until the next regular commission meeting.

“It appears that this is going to wind up in court,” Brown said.

Broyles said she has been “very disturbed” by the information that has been circulated about the proposed clinic and the attitude displayed toward Dr. Bentley. She said some of the opposition’s remarks were “offensive.”

Following the vote several remarks were shouted from the audience in protest and onc supporter yelled, “We’ll be back.”