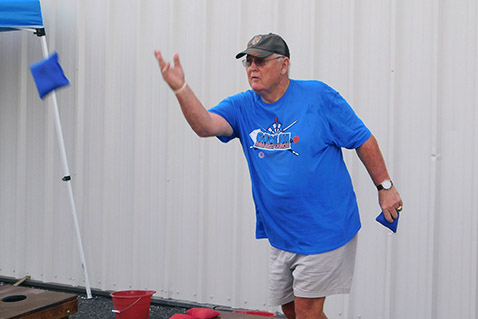 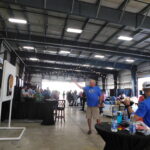 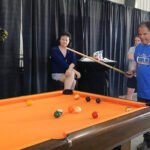 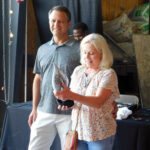 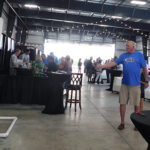 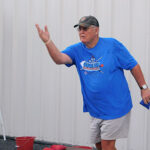 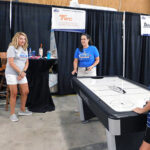 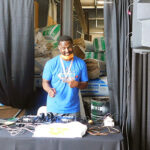 The weather was a bit toasty but spirits weren’t dampened Friday night as Game On Against Cancer celebrated its 10th anniversary at The Wakefield Corporation Friday night.

The event, an annual fundraiser for the Thompson Cancer Survival Center, has raised more than $650,000 since its inception.

The event was the brainchild of Games and Things owners Scott and Lisa Mellon and the first seven years of the charitable event, which gives people the opportunity to play games such as pool, blackjack, cornhole, air hockey, darts and other games against former Vols and other area athletes as well as local television and radio personalities.

The proceeds raised by the event provide various help for those fighting cancer.

It was Lisa Mellon, who is afflicted with Lupus, who began the event as she was seeking treatment for a blood disorder triggered by the disease.

Lisa and Scott were presented with the Founders’ Award as the event celebrated its milestone anniversary.

Game On Against Cancer is a party. It featured food trucks from the area and a silent auction.

Former Volunteers’ quarterback Sterling Henton was the event’s master of ceremonies. Hinton, affectionately known as “Sterl the Pearl,” is a disc jockey. He provided tunes and commentary for the event as only he could.

And he wouldn’t have been anywhere else on this night.

“I’ve been coming here for at least six years and now I’m the DJ,” Henton said. “I’m willing to do anything I can to help Game On and the Thompson Cancer Center with this event.”

Joel Silverberg, Tyler Ivens and Jimmy Hyams from WNML were on hand along with WIVK Landon Doane, and Olympian Missy Kane.

Holtzman, who played darts on this night, said that he enjoyed the event.

“This is a great cause and it’s informal and you get to hang out and play games,” he said. “At other fundraisers, you just sit around and eat food.”

Irwin, who said he’d been at every Game On Against Cancer event, said that he keeps coming back because the event is for a good cause.

“I think I’ve been to every one of these things,” Irwin said. “What keeps me coming back is the cause.

“Every one of us knows someone who’s had cancer and some of us might get it. I don’t think I’ve missed one of these things. This is a good cause.”

Russo, the sports director at WVLT, is a cancer survivor.

“Last year, they raised $72,000 and they do good things,” he said. “I’m a cancer survivor and I’ve seen them provide a lot for cancer patients.”

Event Co-chair Danielle Hemsley has seen the event grow over the last decade.

“The first seven times we had this, we had it at Games and Things, then it got so big that we had to move it,” she said. “This year, I think we sold 450 tickets and we have five food trucks.”

He didn’t play games against celebrities but he did bid on items in the silent auction.

Chase Womble, a Vols fan, said he wanted to support the cause and play pool against some of the Tennessee legends.

“This is a great time and a great cause,” Womble said. “I’m looking forward to playing against some former Vols.

“I probably won’t be all that happy if I lose. I wish it was a little cooler, but it’s not as hot as it has been.”