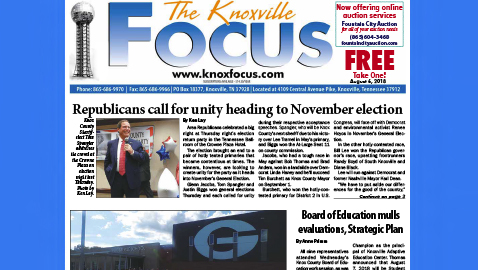 The election brought an end to a pair of hotly tested primaries that became contentious at times. The winners, however, are looking to create unity for the party as it heads into November’s General Election.

Glenn Jacobs, Tom Spangler and Justin Biggs won general elections Thursday and each called for unity during their respective acceptance speeches. Spangler, who will be Knox County’s next sheriff due to his victory over Lee Tramel in May’s primary, and Biggs won the At-Large Seat 11 on county commission.

Jacobs, who had a tough race in May against Bob Thomas and Brad Anders, won in a landslide over Democrat Linda Haney and he’ll succeed Tim Burchett as Knox County Mayor on September 1.

Burchett, who won the hotly-contested primary for District 2 in U.S. Congress, will face off with Democrat and environmental activist Renee Hoyos in November’s General Election.

“We have to put aside our differences for the good of the country,” said Jacobs, who won both the primary and general election without the benefit of television or radio advertising. “We have to grow our party and we have to reach out to our young people. We have to be more inclusive and we have to get the people who are not Republicans.

“The Republican Party represents individual liberty, free markets and economic growth. Those values resonate with everybody and a person in my position has the unique opportunity to grow our state Republican Party. But all of us have to work together. We’re facing a tough race for congress and we’re facing a tough race for the senate [between Republican Marsha Blackburn and former governor Phil Bredesen], so we must stop the European Socialism that the Democratic Party has become.”

Spangler, who had the most supporters in the room Thursday night despite running unopposed, agreed.

“We have to support our candidates,” Spangler said. “Like Mayor Glenn Jacobs said, we have to grow our party. As mayor, Glenn Jacobs will do that. I’m humbled and honored to be your next sheriff and we’ll continue to run the sheriff’s office the way it’s supposed to be run.”

Biggs, 35, is the youngest candidate to be elected to county commission. He, too, called for unity within the party.

“It’s a great night to be a Republican,” Biggs said. “You saw history tonight. I’m the youngest person elected to county commission since 1992 and that’s the greatest feeling in the world. The people in Knox County wanted change and they got it tonight.

“I think as the Republican Party, we have to push Knox County forward and it’s a time to put aside our differences and work together.”

As for Burchett, he was a late arrival Thursday night, showing up around 10:30 p.m. He took the opportunity to thank his supporters, family and friends. He also thanked Jason Emert, Jimmy Matlock and the rest of his opponents for running what he termed “a clean campaign.”

“We all know that Washington is broken, folks, and it needs to be shaken up and that’s what I plan to do.

“It’s time to go up there and show those Washington fat cats some Tennessee common sense.”

Blackburn spoke by phone to her Knoxville supporters and she called for them to come together to defeat Bredesen in November.

She recently opened a campaign office in Knoxville and had local representatives enlisting volunteers for the general election.