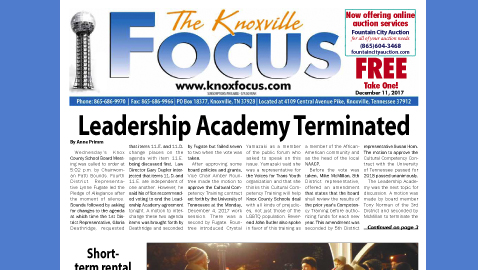 Wednesday’s Knox County School Board Meeting was called to order at 5:02 p.m. by Chairwoman Patti Bounds. Fourth District Representative Lynne Fugate led the Pledge of Allegiance after the moment of silence. Bounds followed by asking for changes to the agenda at which time the 1st District Representative, Gloria Deathridge, requested that items 11.E. and 11.D. change places on the agenda with item 11.E. being discussed first.  Law Director Gary Dupler interjected that items 11.D. and 11.E. are independent of one another. However, he said his office recommended voting to end the Leadership Academy agreement tonight. A motion to interchange these two agenda items was brought forth by  Deathridge and seconded by Fugate but failed seven to two when the vote was taken.

After approving some board policies and grants, Vice Chair Amber Rountree made the motion to approve the Cultural Competency Training contract set forth by the University of Tennessee at the Monday, December 4, 2017 work session. There was a second by Fugate. Rountree introduced Crystal Yamazaki as a member of the public forum who asked to speak on this issue. Yamazaki said she was a representative for the Voices for Trans Youth organization and that she thinks this Cultural Competency Training will help Knox County Schools deal with all kinds of prejudices, not just those of the LGBTQ population. Reverend John Butler also spoke in favor of this training as a member of the African-American community and as the head of the local NAACP.

Before the vote was taken, Mike McMillan, 8th District representative, offered an amendment that states that the board shall review the results of the prior year’s Competency Training before authorizing funds for each new year. This amendment was seconded by 5th District representative Susan Horn. The motion to approve the Cultural Competency Contract with the University of Tennessee passed for 2018 passed unanimously.

Lauren Hopson, on the other hand, pointed out glaring weaknesses of the program.  School board member Jennifer Owen shared many of Hopson’s views. Owen does not think the partnership is working. The University of Tennessee has not had a representative at Knox County School Board meetings since the topic came up for discussion earlier in the fall. Owen said that she has not been able to obtain important information from the university that Knox County Schools needs for evaluation purposes and wondered what this lack of cooperation indicates.

Norman made a point that his constituency was adamant about ending the relationship with the Leadership Academy former superintendent McIntyre. When the vote on this motion was taken, only Deathridge and Fugate voted in favor of keeping the Academy.

The Knox County School Board voted to direct Superintendent Bob Thomas to form a committee to try to study any possible future relationship with the Leadership Academy. Chairwoman Patti Bounds made the motion to form the committee that was seconded by Jennifer Owen that Superintendent Thomas select a committee within the next 30 days which includes a school board member to complete this task.  When the vote on this motion was taken, it passed seven “yes” votes to two “no” votes.

In the public forum, Harper Smith, a sixth grader at West Valley Middle School, spoke as an advocate of school uniforms. Zimbabwe Matavou requested that the 1st District be allowed to become its own school system serving the needs of the African American Community. Candace and Mark Bannister both spoke about the drug problem at Farragut High School and the need to address this issue before it impacts more young lives: “Sticking our heads in the sand is not a solution. Drug testing, especially of athletes, is needed.”