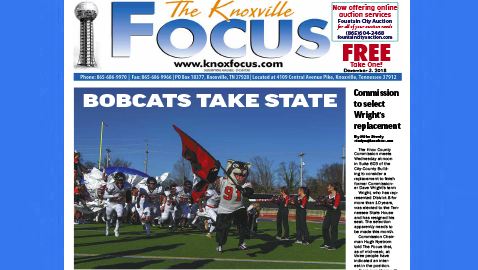 They saved the best for last. Knoxville Central and Henry County even had Tennessee Tech’s Tucker Stadium all to their self Sunday afternoon for the TSSAA Class 5A state football championship game after it had been postponed by a long lightning delay Saturday night.

Both teams put on a good show, but the Bobcats were a little better.

The boys from Fountain City overcame some early miscues to take the lead and refused to give it up down the stretch as they captured Central High’s first state championship since the TSSAA playoffs began in 1969.

With Henry County knocking on the door at the Central 20-yard line in the game’s final minute, defensive specialist Xavier Washington cut down running back Joseph Travis for a four-yard loss on third-and-one and junior linebacker Tyler Bost deflected Henry County’s desperation fourth down pass to wrap up Central’s 14-9 victory at Cookeville.

The title came just two years after the Bobcats finished runners-up to Memphis East at Overall Field. This historic season also included a third straight trip to the semifinals under Coach Bryson Rosser.

Central also had been a state runner-up to Memphis East in 1999.

“I was part of that team in 2016 that came up short against Memphis East, so coming back to the same place and winning the state championship really means a lot,” said senior Ja’kobi Troutman in the post-game celebration.

The Bobcats’ offensive left tackle and noseman also is looking forward to “finally hanging up a gold ball with those two silver ones for the first time.”

Central put together a 13-game win streak after losing its opening two games. The tough Henry County team also finished 13-2. The Patriots from Paris in West Tennessee had won state titles in 2011 and 2013.

“That was the most physical team we’ve played all season, but you know what, we always step it up,” added Troutman. “No matter the situation, no matter the opposing team, we’re always going to step it up and try to dig out the win.”

Central was fortunate in the opening quarter to trail by only three points. Missed tackles by the Bobcats were offset by penalties committed by the Patriots. Good fortune was on Central’s side, too.

On the game’s opening possession, Samari Rack caught a pass from Will Parrish and broke a tackle for a 21-yard gain and first down at the Bobcats’ 34-yard line. On the ensuing play, however, the Henry County center’s low snap got by quarterback Parrish for a 13-yard loss.

That was the first of the Cats’ nine lives to be used in the opening half.

Central went three and out on its first possession as Jason Merritts was stuffed for a two-yard loss and Daunte Holliday was swarmed for an eight-yard loss after taking a third down pass from Dakota Fawver. The Bobcats’ punt went only 15 yards, as a steady wind was a factor throughout the game.

With excellent field position, Henry County’s Ethan Thompson snagged a pass in the flat, broke a tackle and raced 15 yards for a touchdown, but a block in the back nullified the score. That was the second of the Cats’ lives lost.

The Patriots, however, were still in the red zone and it took a hard hit by Holliday on the back line of the end zone to break up a touchdown catch. The Patriots settled for a 30-yard field goal by Darrius Stephens and a 3-0 lead with 5:05 on the first quarter clock.

Henry County recovered the ensuing kickoff, but the brisk wind had blown the ball off the tee before the kick, nullifying the play, another break for Central.

Fawver scrambled to escape a Henry County rush and hit Holliday with 39-yard touchdown to put Central on the scoreboard with 1:20 to go in the second quarter. Jarred Swislosky gave the Bobcats a 7-3 lead.

Washington, who carried the ball on offense only three times in the game, scored on a 10-yard run behind the left side of the line to increase Central’s lead to 14-3 in the third quarter.

MOTHER NATURE: The game was delayed an hour prior to Saturday night’s kickoff due to lightning in the area.  Continued lightning and a forecast for more delays forced the rescheduling of the game.

The Central team returned home Saturday night and made the trip back to Cookeville Sunday morning.

The Henry County team spent the night in Cookeville.

PREGAME SONGS: With the sun shining brightly the day after Saturday night’s stormy weather, the Tennessee Tech hosts treated fans to “Good Day Sunshine” by The Beatles and “I Can See Clearly Now” by Johnny Nash.