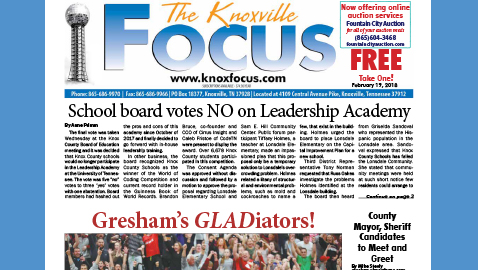 School board votes NO on Leadership Academy

The final vote was taken Wednesday at the Knox County Board of Education meeting and it was decided that Knox County schools would no longer participate in the Leadership Academy at the University of Tennessee. The vote was five “no” votes to three “yes” votes with one abstention. Board members had hashed out the pros and cons of this academy since October of 2017 and finally decided to go forward with in-house leadership training.

In other business, the board recognized Knox County Schools as the winner of the World of Coding Competition and current record holder in the Guinness Book of World Records. Brandon Bruce, co-founder and COO of Cirrus Insight and Caleb Fristoe of CodeTN were present to display the award. Over 6,678 Knox County students participated in this competition.

The Consent Agenda was approved without discussion and followed by a motion to approve the proposal regarding Lonsdale Elementary School and Sam E. Hill Community Center. Public forum participant Tiffany Holmes, a teacher at Lonsdale Elementary, made an impassioned plea that this proposal only be a temporary solution to Lonsdale’s overcrowding problem. Holmes related a litany of structural and environmental problems, such as mold and cockroaches to name a few, that exist in the building. Holmes urged the board to place Lonsdale Elementary on the Capital Improvement Plan for a new school.

The board then heard from Griselda Sandoval who represented the Hispanic population in the Lonsdale area. Sandoval expressed that Knox County Schools has failed the Lonsdale Community. She stated that community meetings were held at such short notice few residents could arrange to attend. She further added that the times that the meetings were held were also inconvenient. Sandoval also wanted the board to include Lonsdale in the Capital Plan for  new elementary and middle schools  with all the services of other new schools like nurses and after school programs.

Second District Representative Jennifer Owen pointed out that the school system has known about this situation at Lonsdale Elementary School for three years now but it has only been addressed publically for four months. “There is no transparency here,” Owen remarked.

As a follow up, First District board member Gloria Deathridge stated that while this may not be an ideal solution for Lonsdale Elementary School, something has to be done now to get students out of the hallways and off the floors into a place where they can receive a proper education.

The next motion to be addressed was to approve the proposal of the Simon Youth Foundation to relocate the Dr. Paul L. Kelley Academy to West Town Mall.  Owen expressed ongoing concern about this school being located too close to establishments that serve alcohol. Law Director Dupler and Superintendent Thomas are looking into this situation and will report back to the board at a later date.

There was a proposal added to the agenda to approve Gibbs Middle School to collaborate with and share data with a Valor Academy in Nashville, Tennessee. The Valor Academy is a public, charter, college-preparatory school whose mission statement is that in order to live inspired and purposeful lives, scholars must integrate a sharp mind, a noble purpose, a big heart, and aligned actions.  Owen was concerned about the issue of sharing data with another school. Representatives Susan Horn and Terry Hill were concerned about the time commitment involved for students and teachers. Teachers particularly are already overcommitted time-wise.

The last item of discussion was the Cultural Competency Program. Eighth District representative Mike McMillan expressed interest in learning more about the specifics of this training. He asked if there could be a video produced for the board to watch. Dr. Laughter, one of the program leaders, quickly replied, “no.” Laughter said that teachers, knowing that the session was being recorded, would not be able to give natural responses. Dr. Laughter did invite board members to spend a seven hour session with a group to find out firsthand what the program is like.