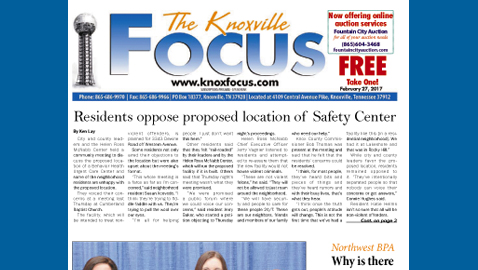 They voiced their concerns at a meeting last Thursday at Cumberland Baptist Church.

The facility, which will be intended to treat non-violent offenders, is planned for 3343 Dewine Road off Western Avenue.

Some residents not only aired their objections to the location but were also upset about the meeting’s format.

“This whole meeting is a farce as far as I’m concerned,” said neighborhood resident Susan Acevedo. “I think they’re trying to fiddle-faddle with us. They’re trying to pull the wool over our eyes.

“I’m all for helping people. I just don’t want this here.”

Other residents said that they felt “rail-roaded” by their leaders and by the Helen Ross McNabb Center, which will run the proposed facility if it is built. Others said that Thursday night’s meeting wasn’t what they were promised.

“We were promised a public forum where we could voice our concerns,” said resident Jerry Baker, who started a petition objecting to Thursday night’s proceedings.

Helen Ross McNabb Chief Executive Officer Jerry Vagnier listened to residents and attempted to re-assure them that the new facility would not house violent criminals.

“These are not violent felons,” he said. “They will not be allowed to just roam around the neighborhood.

“We will have security and people to care for these people 24/7. These are our neighbors, friends and members of our family who need our help.”

Knox County Commissioner Bob Thomas was present at the meeting and said that he felt that the residents’ concerns could be resolved.

“I think, for most people, they’ve heard bits and pieces of things and they’ve heard rumors and with their busy lives, that’s what they hear.

“I think once the truth gets out, people’s attitude will change. This is not the first time that we’ve had a facility like this [in a residential neighborhood]. We had it at Lakeshore and that was in Rocky Hill.”

While city and county leaders favor the proposed location, residents remained opposed to it. “They’ve intentionally separated people so that nobody can voice their concerns or get answers,” Connie Hughes said.

Resident Katie Helms isn’t so sure that all will be non-violent offenders.

“I lost a son to drugs when he was 25 years old,” she said. “And after my son died, the drug dealers kept calling and I told them, ‘You killed him.’

“One of the drug dealers said that he was away getting clean somewhere and that he was going to find him and get even with him. These are middle-class neighborhoods and we have kids and school buses here. Drug dealers are predators and they’ll be waiting.”

Jack Copeland of the Maple Grove Homeowners Association agreed with the other opponents of the proposed location.

“I think this is needed but it’s not needed here,” he said. “They set this up so we could hear them but they couldn’t hear us. This is personal for me because I have a son who is a drug addict and he’s homeless. He’s somewhere in Knoxville but I haven’t seen him in over a year.

“They say that these people are not violent, but when you’re coming down, the first thing that you’re going to do is whatever you need to do to get your next fix.”

Another meeting is planned for Thursday at 7 p.m. at Cumberland Baptist Church.