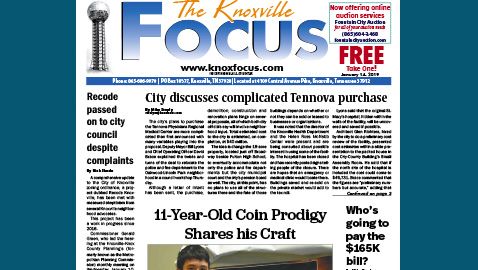 The city’s plans to purchase the Tennova Physicians Regional Medical Center are more complicated than first announced with many variables playing into the proposal. Deputy Mayor Bill Lyons and Chief Operating Officer David Brace explained the twists and turns of the deal to relocate the police and fire department to the Oakwood-Lincoln Park neighborhood in a council workshop Thursday.

Although a letter of intent has been sent, the purchase, demolition, construction and renovation plans hinge on several proposals, all of which both city officials say will involve neighborhood input. Total estimated cost to the city is estimated, on completion, at $40 million.

The idea is change the 18-acre property, located just off Broadway beside Fulton High School, to eventually accommodate not only the police and fire departments but the city municipal court and the city’s pension board as well. The city, at this point, has no plans to use all of the structures there and the fate of those buildings depends on whether or not they can be sold or leased to businesses or organizations.

It was noted that the director of the Knoxville Health Department and the Helen Ross McNabb Center were present and are being consulted about possible interest in using some of the facility. The hospital has been closed and has recently posted signs telling people of the closure. There are hopes that an emergency or medical clinic would locate there. Buildings saved and re-sold on the private market would add to the tax roll.

Lyons said that the original St. Mary’s hospital, hidden within the walls of the facility, will be uncovered and saved if possible.

Architect Glen Richters, hired by the city to do a preliminary cost review of the facility, presented cost estimates within a slide presentation to the packed house in the City-County Building’s Small Assembly Room. He said that if the north site of the hospital is included the cost could come to $46,731. Brace commented that the figures are “preliminary numbers but accurate,” adding that the city is happy with the estimate.

Richters said that initially doing all the planned demolition there at one time would save money and Brace added that Tennova has been very cooperative in the effort so far. He also said that if the council wants a tour of the current buildings that would be done.

Vice Chairman Finbarr Saunders asked if other parcels there would remain under the ownership of Tennova and the company replied that the convent there for nuns and a day-care facility will remain until other plans are made.

Councilman Mark Campen asked about security at the current facility and Brace said that Tennova has its own security service there and some doctors offices inside the building remain open there and may remain open for four to six months.

“The City is not closing the hospital, Tennova was closing it,” Brace emphasized.

At the same time Tennova is asking the city for a tax break on a possible Middlebrook medical facility. The city is discussing a $16 million PILOT tax break for 15 years on that proposal. Tennova has not decided what type of medical facility might be built at that West Knoxville site.

Councilman Marshall Stair asked what would happen if the PILOT was in place and Tennova sold the property. Lyons said a buyer may qualify for the tax break.

Councilwoman Lauren Rider said “alarm bells went off in the community” when some demolition was announced on the hospital site.

“We’ll get input from Knox Heritage,” Brace said, adding that the neighborhood has been and will be consulted.

Councilwoman Stephanie Welch asked about the proposed “Science Center” development at the current site of the police department. Brace said that Jim Clayton, who proposes that museum, met with the city recently and is hiring a design firm. The idea is to move the police and sell all or part of the property above the Civic Auditorium to Clayton for his proposed $150 million museum.

“The puzzle pieces have to come together,” Brace said of the project.

“A development agreement is under study, I believe we’re close,” Brace said.