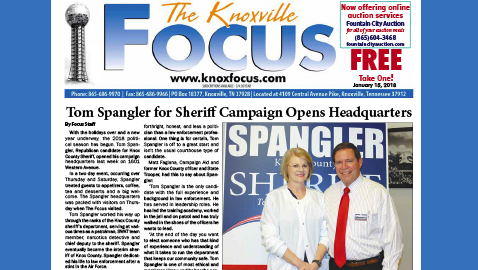 With the holidays over and a new year underway, the 2018 political season has begun. Tom Spangler, Republican candidate for Knox County Sheriff, opened his campaign headquarters last week on 1601 Western Avenue.

In a two-day event, occurring over Thursday and Saturday, Spangler treated guests to appetizers, coffee, tea and desserts and a big welcome. The Spangler headquarters was packed with visitors on Thursday when The Focus visited.

Tom Spangler worked his way up through the ranks of the Knox County sheriff’s department, serving at various times as a patrolman, SWAT team member, narcotics detective and chief deputy to the sheriff. Spangler eventually became the interim sheriff of Knox County. Spangler dedicated his life to law enforcement after a stint in the Air Force.

The number of retired and current sheriff’s deputies and other law enforcement professionals joining Spangler for the opening of his headquarters was amazing. It was impossible to miss that Spangler has deep and strong support from his fellow law enforcement officers, but there was a big crowd of ordinary citizens in attendance as well. That a large crowd turned out was not surprising at all as Spangler is known for being forthright, honest, and less a politician than a law enforcement professional. One thing is for certain, Tom Spangler is off to a great start and isn’t the usual courthouse type of candidate.

Matt Fagiana, Campaign Aid and former Knox County officer and State Trooper, had this to say about Spangler:

“Tom Spangler is the only candidate with the full experience and background in law enforcement. He has served in leadership roles. He has led the training academy, worked in the jail and on patrol and has truly walked in the shoes of the officers he wants to lead.

“Tom Spangler is a candidate we the taxpayers can trust to make the most of the county’s resources. If given the opportunity by the voters he will make a great sheriff for the citizens of Knox County.”