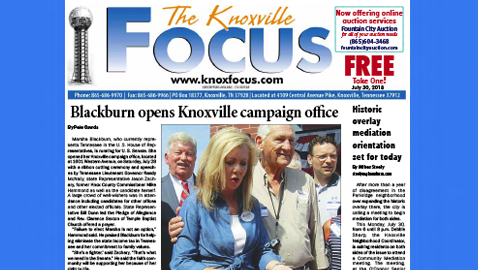 Marsha Blackburn, who currently represents Tennessee in the U. S. House of Representatives, is running for U. S. Senate. She opened her Knoxville campaign office, located at 1601 Western Avenue, on Saturday, July 28 with a ribbon cutting ceremony and speeches by Tennessee Lieutenant Governor Randy McNally, state Representative Jason Zachary, former Knox County Commissioner Mike Hammond as well as the candidate herself.  A large crowd of well-wishers was in attendance including candidates for other offices and other elected officials. State Representative Bill Dunn led the Pledge of Allegiance and Rev. Clarence Sexton of Temple Baptist Church offered a prayer.

“Failure to elect Marsha is not an option,” Hammond said. He praised Blackburn for helping eliminate the state income tax in Tennessee and her commitment to family values.

“She’s a fighter,’ said Zachary, “That’s what we need in the Senate.” He said the faith community will be supporting her because of her right to life.

“We’ve got to make sure we have a conservative voice in the Senate,” Zachary said as he called for “all hands on deck to make sure she is the next Senator from Tennessee.”

“I am coming as a force for conservative, positive change,” Blackburn avowed.  “We will never have a state income tax in Tennessee.” She said that since 2002, thanks in part to her efforts, Tennesseans can deduct sales tax from their federal income tax, resulting in substantial savings on tax payments.

“Tennesseans want a conservative in the U. S. Senate who will stand with the president and vote ‘yes’ for federal court judges,” Blackburn said.

“The Democrats say there is a blue wave sweeping the country,” Blackburn said, “When it reaches Tennessee it will crash against the red wall.”

Referring to past elections victories, she said, “We won because people were with us and our policies were right.”

“I need your help so we can win this race,” Blackburn concluded, asking her supporters to knock on doors and make telephone calls.

Blackburn is a native of Mississippi and a graduate of Mississippi State University. She worked her way through college by selling books for the Southwestern Company, eventually becoming a sales manager for that company. She moved on to serve as Director of Retail Fashion and Special Events for the Castner Knott company. Later Blackburn founded Marketing Strategies, which focuses on the retail marketplace.

Blackburn began her elected service in 1998 as a Tennessee State Senator.  In 2002 she was elected to the U.S. House of Representatives from Tennessee’s 7th Congressional District where she currently holds a seat on the House Energy and Commerce Committee.

Blackburn and her husband Chuck live in Williamson County and have two grown children and two grandsons.