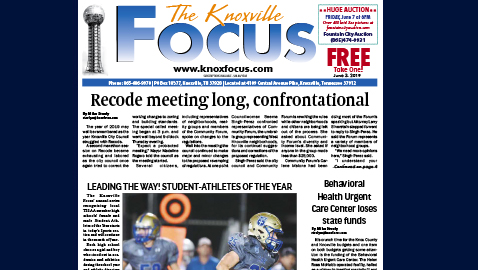 The year of 2019 may well be remembered as the year Knoxville City Council struggled with Recode.

A second marathon session on Recode became exhausting and labored as the city council once again tried to correct the working changes to zoning and building standards. The special called meeting began at 3 p.m. and went well beyond 9 o’clock Thursday evening.

Several citizens, including representatives of neighborhoods, reality groups and members of the Community Forum, spoke on changes to the regulations.

Well into the meeting the council continued to make major and minor changes to the proposed revamping of regulations. At one point Councilwoman Seema Singh-Perez confronted representatives of Community Forum, the umbrella group representing West Knoxville neighborhoods, for its continual suggestions and corrections of the proposed regulation.

Singh-Perez said the city council and Community Forum is rewriting the rules while other neighborhoods and citizens are being left out of the process. She asked about Community Forum’s diversity and income level. She asked if anyone in the group made less than $25,000.

Community Forum’s Carlene Malone had been doing most of the Forum’s speaking but Attorney Larry Silverstein stepped forward to reply to Singh-Perez. He said the Forum represents a variety of members of neighborhood groups.

“I understand your frustration,” Silverstein said, who noted the income of members “probably skew higher.”

“We are not represented well when it is just a conversation between two groups,” Singh-Perez said.

Mayor Madeline Rogero interceded and said the Recode “has been a long process” and an attempt was made to reach out to all the communities. She then told the council member, “It now comes down to you as representatives of those communities. We represent and think about people who are not here. We need to remember who is not in the room.”

The first hours of the prolonged council meeting went over the changes made during the first meeting and changes the planning staff was suggesting. Rogero told the council and the public that a final vote would not be taken until a meeting on July 16th or 30th.  She said that if no decision is made in July that the meetings in August would be called.

Revisions in the proposed zoning map are still being made and need approval along with two final readings of the Recode revision now called “Draft 5.”

Within the bowels of the proposed regulations were discussions on what constitutes a family, where accessary buildings may be located, what is a public safety facility, occupancy numbers in single family homes, hillside protection standards for all structures, where outdoor events can be permitted, the height of commercial buildings, the definition of half-way houses, storage sheds, restaurants in office parks, and home occupations.

Some of the proposals were approved by the council and many more changes were left to the planning staff to suggest or include in the final Recode regulations. Council members Andrew Roberto, Lauren Rider, Gwen McKenzie and George Wallace were most active in the discussion.