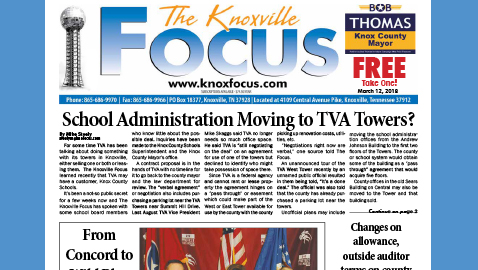 For some time TVA has been talking about doing something with its towers in Knoxville, either selling one or both or leasing them.  The Knoxville Focus learned recently that TVA may have a customer, Knox County Schools.

It’s been a not-so public secret for a few weeks now and The Knoxville Focus has spoken with some school board members who know little about the possible deal. Inquiries have been made to the Knox County Schools Superintendent and the Knox County Mayor’s office.

A contract proposal is in the hands of TVA with no timeline for it to go back to the county mayor and the law department for review. The “verbal agreement” or negotiation also includes purchasing a parking lot near the TVA Towers near Summit Hill Drive. Last August TVA Vice President Mike Skaggs said TVA no longer needs so much office space. He said TVA is “still negotiating on the deal” on an agreement for use of one of the towers but declined to identify who might take possession of space there.

Since TVA is a federal agency and cannot rent or lease property the agreement hinges on a “pass through” or easement which could make part of the West or East Tower available for use by the county with the county picking up renovation costs, utilities, etc.

“Negotiations right now are verbal,” one source told The Focus.

An unannounced tour of the TVA West Tower recently by an unnamed public official resulted in them being told, “It’s a done deal.” The official was also told that the county has already purchased a parking lot near the towers.

Unofficial plans may include moving the school administration offices from the Andrew Johnson Building to the first two floors of the Towers. The county or school system would obtain some of the building as a “pass through” agreement that would acquire five floors.

County offices in the old Sears Building on Central may also be moved to the Tower and that building sold.

Three county commissioners who did not want to be quoted said they have heard the same story but with less details than given here.

“I hope the cost of renovation at the Tower, which has been empty for several years, would be paid for by the sale of the Andrew Johnson Building,” another said.

Of course any purchase, lease or pass-through would probably need approval by the board of education and the county commission. In an August TVA Board meeting one of the agenda items included “Authorize actions to convey a portion of the Knoxville Office Complex and Summer Place Garage Complex.”

Two school board members told The Focus the last thing they heard was that the county was considering purchasing the former Regal Building in Halls. Another member said that the deal isn’t happening.

“I wish they would keep us informed rather than come to us after a deal for our approval,” one BOE member told The Focus.