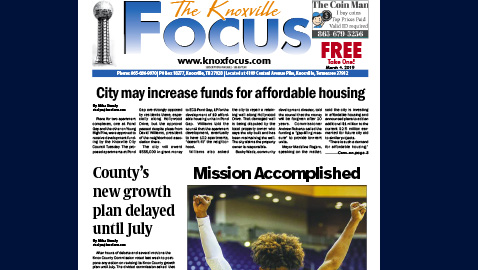 Plans for two apartment complexes, one at Pond Gap and the other on Young High Pike, were approved to receive development funding by the Knoxville City Council Tuesday. The proposed apartments at Pond Gap are strongly opposed by residents there, especially along Hollywood Drive, but the approval passed despite pleas from David Williams, president of the neighborhood association there.

The city will award $555,000 in grant money to ECG Pond Gap, LP for the development of 19 affordable housing units in Pond Gap.  Williams told the council that the apartment development, eventually to have 102 apartments, “doesn’t fit” the neighborhood.

Williams also asked the city to repair a retaining wall along Hollywood Drive. That damaged wall is being disputed by the local property owner who says the city built and has been maintaining the wall. The city claims the property owner is responsible.

Becky Wade, community development director, told the council that the money will be forgiven after 20 years. Commissioner Andrew Roberto called the funding a “gap-filling measure” to provide low-rent units.

Mayor Madeline Rogero, speaking on the matter, said the city is investing in affordable housing and announced plans to add an additional $1 million to the current $2.5 million earmarked for future city aid to similar projects.

“There is such a demand for affordable housing,” Rogero said.

In a separate vote the council voted to award $1,320,000 from the Affordable Rental Development Fund to ACG’s Young High project for the development of 44 housing units. That South Knoxville project is supported by nearby neighborhood associations.

The council split on a measure to rezone 53 properties in the Fort Sanders neighborhood so the hospital there can expand. Councilman Marshall Stair said he doesn’t “see the rush for this” and said he hopes the hospital takes an interest in stabilizing the neighborhood. Stair was joined in his “No” vote by council members Mark Campen and Lauren Rider.

Code enforcement duties will shift from the Public Service Division to the Plans Review and Building Inspection Department. The council approved the move without further discussion.

The council also voted give about $288,488 for school security training, safety improvements and technology and adding security guards. Knox County will pick up 25% of the cost.

Mayor Rogero also spoke briefly about flooding in the city and the efforts of various city departments to respond to the event. She said that initially 143 city roads were inundated and, as of the meeting, 13 streets remain closed to traffic. She said the city is moving to document the damage and asked anyone with damage to call “311” and all reports will be forwarded to TEMA for possible federal funding assistance.