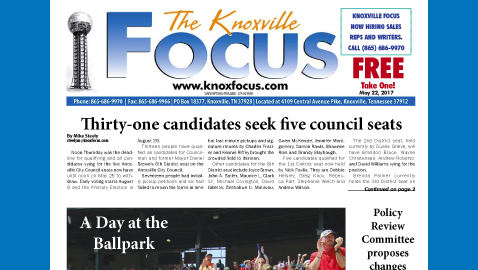 Noon Thursday was the deadline for qualifying and all candidates vying for the five Knoxville City Council seats now have until noon on May 25 to withdraw. Early voting starts August 9 and the Primary Election is August 29.

Seventeen people had initially pickup petitions and six had failed to return the forms in time but last minute pickups and signature returns by Charles Frazier and Kennie Riffey brought the crowded field to thirteen.

The primary election is open to only those voters in the upcoming vacant district seats. The General Election, on November 7, is open for all voters in Knoxville  to vote on the two top candidates from the primary.