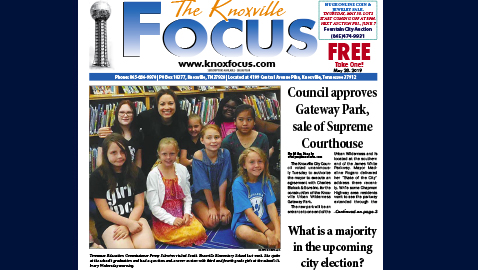 Her stay was brief but the morning was busy for Schwinn, who gave the opening remarks at the school’s fifth-grade graduation.

Following her time at that ceremony, Schwinn went to the school’s library where she was greeted by a group of inquisitive third and fourth-grade girls, who had plenty of questions.

Schwinn also purchased doughnuts for the students, as she discussed how she ended up working in education.

Schwinn was pleased to make the trip and she felt the 30-minute question-and-answer session was a bit brief. She left her email address with South Knoxville principal Tana Nicely so the students could email her over the summer break.

“I go to schools every day but I don’t get to Knoxville as much as I would like,” Schwinn said before heading to catch a plane back to Nashville. “I’m excited to be here and to visit with these girls.”

Schwinn, a graduate of the University of California, Berkley, took questions from the students about her job, her family and her decision to become a teacher and later, an education commissioner.

“I wanted to be a doctor, and my aunts were both maternity nurses,” she said. “I was a candy striper at a hospital and I loved it.

“My aunts told me that I should come and see a baby being born and I saw it and decided that I wanted to work with children once they were out. I have two young girls and I wanted to prove that I could be a teacher and a mother. I wanted to be a commissioner because I wanted to do more to help teachers because we don’t pay teachers enough money.”

Nicely was excited to have Schwinn make a visit to South Knoxville.

“She’s very approachable and she bought the doughnuts and she asked how many she needed,” Nicely said. “I called her office and the people there were really helpful.

“I’ve never dealt with anybody in that level of government that approachable.”