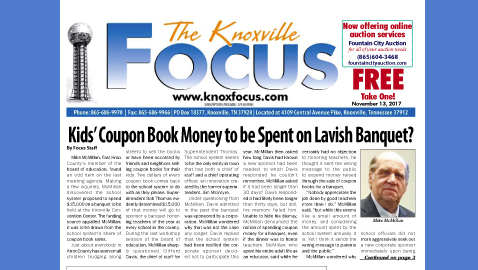 Kids’ Coupon Book Money to be Spent on Lavish Banquet?

Mike McMillan, East Knox County’s member of the board of education, found an odd item on the last meeting agenda. Making a few inquiries, McMillan discovered the school system proposed to spend $15,000 on a banquet to be held at the Knoxville Convention Center. The funding source appalled McMillan; it was to be drawn from the school system’s share of coupon book sales.

Just about everybody in Knox County has seen small children trudging along streets to sell the books or have been accosted by friends and neighbors selling coupon books for their kids. Two dollars of every coupon book comes back to the school system to do with as they please. Superintendent Bob Thomas evidently determined $15,000 of that money will go to sponsor a banquet honoring teachers of the year at every school in the county. During the last workshop session of the board of education, McMillan sharply questioned Clifford Davis, the chief of staff for Superintendent Thomas. The school system seems to be the only entity in town that has both a chief of staff and a chief operating officer, an innovation created by the former superintendent, Jim McIntyre.

Under questioning from McMillan, Davis admitted in the past the banquet was sponsored by a corporation. McMillan wondered why that was not the case any longer. Davis replied that the school system had been notified the corporate sponsor decided not to participate this year. McMillan then asked how long Davis had known a new sponsor had been needed, to which Davis responded he couldn’t remember. McMillan asked if it had been longer than 30 days? Davis responded it had likely been longer than thirty days, but still, his memory failed him. Unable to hide his dismay, McMillan denounced the notion of spending coupon money for a banquet, even if the dinner was to honor teachers. McMillan, who spent his entire adult life as an educator, said while he certainly had no objection to honoring teachers, he thought it sent the wrong message to the public to expend money raised through the sale of coupon books for a banquet.

“Nobody appreciates the job done by good teachers more than I do,” McMillan said, “but while this seems like a small amount of money, and considering the amount spent by the school system annually, it is. Yet I think it sends the wrong message to parents and the public.”

McMillan wondered why school officials did not more aggressively seek out a new corporate sponsor immediately upon being notified the former sponsor no longer wished to underwrite the event. Arrangements were being made by the school system for 500 people to attend, while each school selects a “teacher of the year,” each of whom is allowed to invite two guests. McMillan figures that would account for around 300 people and wondered why the school system didn’t resort to having guests pay for their own dinners before dipping into coupon book sales.

“Evidently that was an idea never considered by the administration,” McMillan said wryly.

“There are parents all across the county who are being asked to contribute money toward buying school supplies, like paper towels and copy paper,” McMillan said. “Considering that, I think there will be some parents outraged by the notion of the school system using $15,000 for a big party.”

The school system spends more than half a billion dollars annually in Knox County alone. Two-thirds of every tax dollar spent in Knox County goes to the school system. McMillan, a former county commissioner, says he believes every member of the Board of Education has a responsibility to taxpayers as much as children, parents, and teachers. The school system has been under fire recently, in large measure for things having to do with money. The school system has been going through an embarrassing scandal related to the CTE program after nobody in the administration seemed to realize that $450,000 more or less disappeared. That in spite of the fact the head of the program had been the subject of an official reprimand and a scathing report from the Tennessee Comptroller’s office. The matter is now under criminal investigation.

“The truth is, over the years, the school system hasn’t gotten a lot of scrutiny in how it spends taxpayer money,” McMillan said. “That certainly hasn’t helped with either transparency or accountability.”

McMillan reminded The Focus while still serving as superintendent, Jim McIntyre had a habit of overspending, while constantly seeking higher taxes from the county commission. McIntyre’s overspending brought a reaction from Mayor Tim Burchett and the county commission in the form of a Memorandum of Understanding, which was designed to keep the school system’s spending within its own budget.

“People have a right to expect the school system to allocate its resources wisely and well,” McMillan stated. “Invoking children at every opportunity is disgusting, especially when the school system is taking $15,000 for a big party after the kids have worked so hard to sell coupon books. I wonder how many people would have bought a coupon book if they had known that?”