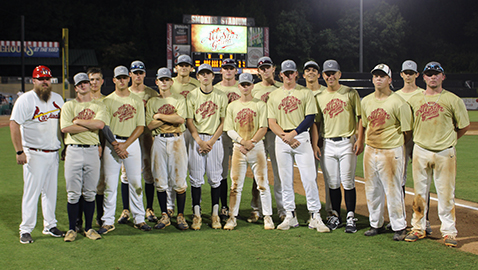 The score by innings on the Smokies Stadium scoreboard had an unusual look to it in the East Tennessee High School Baseball League All-Star Game.

The West team had put up two runs in the third, fourth, fifth and sixth innings en route to an 8-3 victory over the East squad Friday night, July 3, at Kodak.

The West All-Stars, in other words, had “too” much for their opponents!

In the end, West Manager Zac Clark liked how things added up.

“I felt like the key to our team winning was the way they approached each at-bat,” said Clark. “We had a very loose approach at the plate and that allowed our guys to get into good fastball counts and they did a great job of putting the ball in play.”

Mason Speanburgh of Hardin Valley Academy, a rising senior outfielder, was selected the Most Valuable Player of the Game as he went 2-for-4 and drove in three runs for the West All-Stars.

Teammate Tres Parton of Seymour, an “alternate” on the West team, was 2-for-3 and added two RBI. He’ll be a senior for the Eagles next spring.

Trent Chandler, a rising junior at Hardin Valley, pitched scoreless innings in the fourth and fifth to earn the mound win.

AJ Berry, a rising junior at Seymour, turned in perhaps the most exciting play of the game when he raced around the bases in the top of the fifth inning for an inside-the-park home run, after the ball got past an East outfielder.

Evan Williams, representing the Mean Green of Carter, contributed a triple to the winners’ nine-hit attack.

Camden Lovin, a senior from Morristown West High School, led the East at the plate with a pair of singles.

Clark, who is General Manager of the Johnson City Cardinals in the Appalachian League, a rookie team of the St. Louis Cardinals, was impressed with the West All-Stars’ approach to the game.

“It was really refreshing,” he said. “None of them took themselves too seriously; they were there to have a good time and enjoy the experience. They didn’t play with any pressure; they were just having fun and in today’s world that was great to see. They came to compete and win, but they didn’t lose sight of this game being meant for fun.”

The East All-Stars grabbed a 1-0 lead in the bottom of the second inning but were held scoreless until rallying for two runs in the seventh. They finished with six hits in the contest.

Chris Allen, President of Boyd Sports, estimated the attendance for the game to be close to 1,500.

“It was a good crowd for this game,” he said. “Hopefully, the kids appreciated it.”

“I think our kids got to have a good time and celebrate with their teammates and families on a wonderful start to their summer league season,” said Manager Clark. “These kids have all worked their tails off during their high school careers and this was a celebration of that.”

A seniors’ game was held prior to the All-Star game and a fireworks show capped the evening.

This is the first year the Tennessee Smokies have hosted an East Tennessee High School Baseball League. The opportunity came about after the coronavirus prevented the minor league season from starting.

After high school teams’ seasons were cancelled after just a few games were played in March, the idea for the high school league has helped make up for much of the lost playing time.

The second half of the season started July 6 with the undefeated Sevier County Cavaliers on top of the standings and will continue this week at Smokies Stadium.

In addition to the 12-team division that plays at Smokies Stadium, another division of the ETHSBL is being played in upper East Tennessee.

The season will end with divisional playoffs starting July 24 followed by a best-of-five game league championship series at Smokies Stadium.