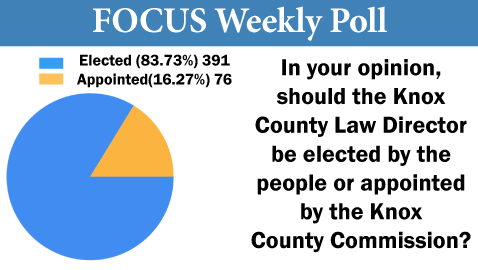 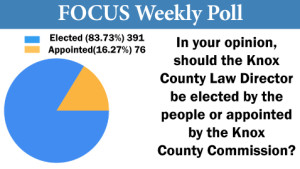 The most recent Knoxville Focus poll asked the question, “In your opinion, should the Knox Law Director be elected by the people or appointed by the Knox County Commission?”

The most support for an appointed Law Director came from the Fourth and Fifth Districts, although even inside those districts more than 70% of voters preferred an elected Law Director.

The question of appointing versus electing the Knox County Law Director is being considered by the Charter Review Committee who will decide on placing it before Knox Countians in a referendum. A similar referendum two years ago saw Knox County voters defeat proposals on appointing currently elected officials by a 3:1 margin.

The Knoxville Focus has attracted a great deal of attention from other media outlets with regard to its weekly polls. Readership has gone up substantially, as has the participation in the polling. As to the accuracy of Focus polls, national publications have recently featured polling data, for instance, in the forthcoming race for the United States Senate in North Dakota. Senator Kent Conrad is retiring, leaving an open seat where Congressman-At-Large Rick Berg is expected to be the Republican nominee and former state Attorney General Heidi Heitkamp is presumed to be the Democratic nominee. A poll by Forum/Essman was conducted the first week of May with a statewide sampling of 500 voters; the second poll conducted the first week of June by Mason-Dixon sampled 625 voters statewide. The Focus tries to sample 500 likely voters in Knox County versus the entire state of North Dakota with 53 counties.

The Focus will continue publishing the result of polls conducted on public issues and personalities. Be sure to participate if contacted and look each week to see what you and your neighbors think.

Click here to view the poll’s breakdown by percentage.