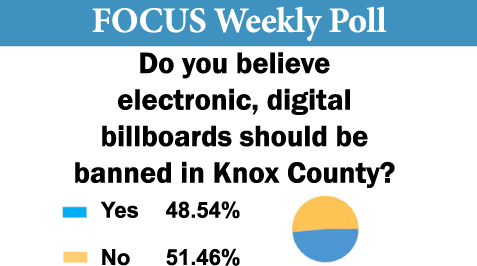 Knoxville and Knox County voters appear to be sharply divided in their opinions about digital signs.  This week’s Knoxville Focus poll asked likely voters this question: “Do you believe electronic digital billboards should be banned in Knox County?”

Seniors were the group who most strongly believed electronic billboards should be banned, with 51.55% of voters 65 and older favoring the ban.

Every district inside the City of Knoxville, save for the Third, favored banning electronic billboards.  Inside the Third District, more than 55% of respondents said they didn’t believe digital billboards should be banned.  In the Fifth District, which is comprised largely of the Town of Farragut, the numbers were almost identical, although in reverse with 55% favoring the ban.

Outside the City of Knoxville, the numbers supporting a ban dropped except in the Ninth, which is South Knoxville where the numbers were an even spilt.