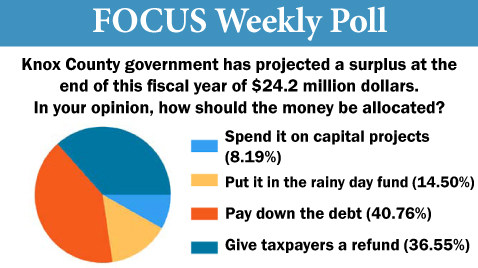 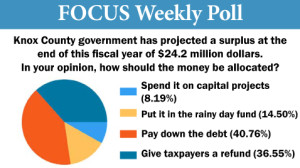 Likely voters were asked the question, “Knox County government has projected a surplus at the end of this fiscal year $24.2 million dollars.  In your opinion how should the money be allocated?”  Voters were given the choice of “Spend it on capital projects,” “Put it in the rainy day fund,” “Pay down the debt,” and “Give taxpayers a refund.”

By a narrow margin, voters favored paying down the debt.  Knox County currently has a debt in excess of $1 billion.  If Knox County were to raise the property tax a dollar dedicated to paying off the debt, it would take at least ten years to pay off the county’s debt if Knox County doesn’t accrue additional debt in the meantime.

Residents of the First District were overwhelming in the their support of refunding the taxpayers’ money with over 61% of voters favoring a refund.  No other district in the city or county had as much as 40% in favor of a refund to taxpayers.

More men than women favored paying downing the debt with a final number of just over 40% favoring paying down the debt.  That number was narrowly ahead of the just over 36% who favored a rebate to taxpayers.