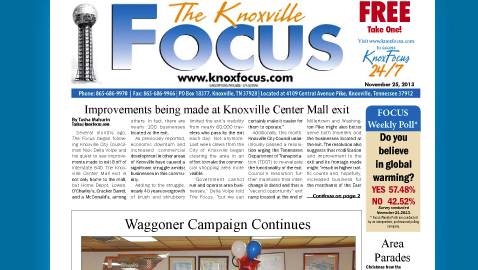 Improvements being made at Knoxville Center Mall exit

Several months ago, The Focus began following Knoxville City Councilman Nick Della Volpe and his quest to see improvements made to exit 8 off of Interstate 640. The Knoxville Center Mall exit is not only home to the mall, but Home Depot, Lowes, O’Charley’s, Cracker Barrel, and a McDonald’s, among others. In fact, there are nearly 100 businesses located at the exit.

As previously reported, economic downturn and increased commercial development in other areas of Knoxville have caused a significant struggle amidst businesses in this community.

Adding to the struggle, nearly 40 years overgrowth of brush and shrubbery limited the exit’s visibility from nearly 60,000 travelers who pass by the exit each day. Not anymore. Last week crews from the City of Knoxville began clearing the area in an effort to make the commercial shopping area more visible.

“Government cannot run and operate area businesses,” Della Volpe told The Focus, “but we can certainly make it easier for them to operate.”

Additionally, this month, Knoxville City Council unanimously passed a resolution urging the Tennessee Department of Transportation (TDOT) to re-evaluate the functionality of the exit. Council’s resolution further maintains that interchange is dated and that a “second opportunity” exit ramp located at the end of Millertown and Washington Pike might also better serve both travelers and the businesses located at the exit. The resolution also suggests that modification and improvement to the exit and its frontage roads might “result in higher traffic counts and, hopefully, increased business for the merchants of the East Towne area exits and its surrounding area”- which would increase revenue for the businesses, as well as, state and local governments.

This group of merchants pays over $2.6 million per year in city and county property taxes, in addition to $1.5- $2 million in city sales tax, and over $10 million in state sales tax. They also provide some 2,000 jobs.

The Focus will continue to follow the story as it develops both in print and online.