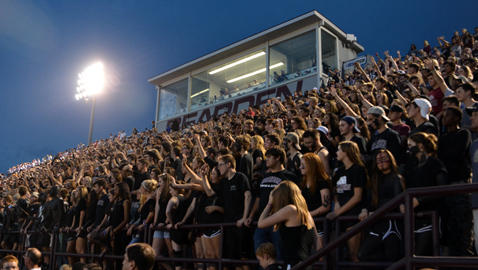 PHOTO BY DAN ANDREWS
The stands at Bearden High are packed before lightning delayed play in the Bulldogs’ game against rival Farragut.

Lightning interrupted play in the annual West Knoxville high school football rivalry between Bearden and Farragut, but the Admirals, for the most part, had already taken care of business.

Mixing the run and pass, Farragut scored on its first two possessions and added a third touchdown before a 1 hour, 19 minute weather delay en route to a 40-9 victory over the Bulldogs Friday night at Bill Young Field.

If there was any doubt about the outcome when play resumed, the Admirals quickly erased it with an 82-yard, 14-play scoring drive.

The Admirals will play at Karns in a Region 3-5A contest this coming Friday, while Bearden (2-2) will try to end a two-game skid against Region 1-6A foe William Blount in its homecoming game.

“We’re 4-0,” said veteran Farragut head coach Eddie Courtney. “We’ll let the kids enjoy that part of it, but there are still things we’ve got to work on.

“The offense at times did well, the defense certainly did a good job and our special teams are the key to this football team right now. Joe Doyle and Carter Phillipy are both doing a good job punting and kicking.

“It was a good win that means a lot to the community, even though it’s not a region game anymore.”

Naumoff, a southpaw, tossed a 24-yard TD pass over the middle to Justin Kirkendall to complete an impressive 76-yard game-opening march.

After an 11-yard shank punt gave Farragut a short field, Cooper Hardin hauled in a 6-yard TD pass despite cornerback Nick Ingrando being wrapped around him on the catch.

In addition to his extra-point kicks, Phillipy kept Bearden backed up with kickoffs into the end zone for touchbacks.

Trailing 14-0 after one quarter, the Bulldogs flipped the field when new punter John Matthew Lee’s 58-yarder was downed at the Farragut 3.

That slowed down the Admirals for awhile, but Farragut regained excellent field position when safety Michael Travis came up with a turnover after the ball popped loose on Bearden quarterback Cameron Jones’ pass to Skyler Hammett.

Thomas twisted his way into paydirt four plays later from two yards out. Phillipy’s PAT made it 21-0 with 5:31 showing in the second quarter.

Naumoff started a long drive with a 14-yard run. He later passed 15 yards to Kirkendall. Thomas ripped off an 18-yard run. Davis Simmons scored on Naumoff’s 6-yard slant pass. The first half finally ended with the Admirals ahead 27-0.

Farragut muffed a punt in the third quarter and Bearden cashed in with a determined 4-yard run by Ty Warren.

Running back Amon Johnson contributed some valuable relief work as the Admirals responded with a 70-yard drive. Naumoff battled into the end zone from nine yards out to make it 33-7.

Bearden drove to the Farragut 8 but stalled. The Bulldogs salvaged a safety when JaQuavis Russell and Cameron Miller tackled Johnson in the end zone.

Thomas, running like he had his second wind, raced 19 yards to wrap up the scoring with 7:19 remaining in the final quarter.

“We didn’t carry over our practice into the game,” said Bearden coach Morgan Shinlever. “When you struggle to do that against a good team like Farragut, they’re going to expose you and that’s what happened.”