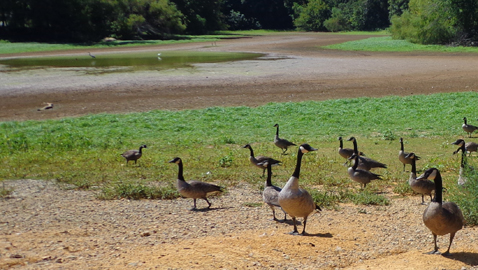 One of the beautiful features about the Colonial Village neighborhood is Butterfly Lake. The shallow lake sits at the entry of the South Knoxville neighborhood and draws all types of water fowl. Last week the Canadian Geese were waddling along the shoreline looking for food and two cranes were far away standing in what’s left of the lake’s water.

Butterfly Lake is drying up again and, once again, the neighborhood homeowners are trying to save it. The problem seems to be twofold: it hasn’t rained much there and the lake sits atop a sinkhole that apparently drains water from the lake.

Terry Caruthers, President of the Colonial Village Neighborhood Association, said the lake is fed by an underground stream and the lack of foliage around the lake has contributed to the evaporation of the water.

Butterfly Lake went dry back in 2007 and in 2008 the neighbors raised enough money to have KUB refill it. A similar campaign is now underway.

Patti Thigpen has obtained permission from the lake owners to raise funds and told The Focus last week that $1,400 has been funded, but more money is needed to have the lake water restored.

Thigpen said the lake suffered a fish kill two weeks ago due to the lack of oxygen in the water. The lake has an ongoing algae problem as well because so many people feed the ducks and geese bread, which creates algae from the fowl droppings.

Colonial Village was developed following World War II and has about 900 homes. The neighborhood association meets the second Thursday of each month at the South Knoxville Church of God at 5623 Magazine Road.

Association members have successfully worked to get the speed limit on Chapman Highway down to 45 miles per hour, get traffic calming in the neighborhood, support Moreland Heights Elementary School, establish a welcome sign at the entrance and promote litter pick up. They host a spring and fall cookout, collect school supplies and take part in the school’s beautification efforts. While promoting community pride the association also promotes economic development, getting citizens involved and finding community solutions.